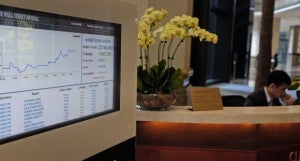 An electronic board showing the Hong Kong share index is seen at a commercial building in Hong Kong Thursday, April 10, 2014. AP FILE PHOTO

HONG KONG – Asian markets were mixed in Easter holiday-hit trade Monday, with Japan’s Nikkei rallying on the back of a weaker yen as data showed the country’s trade deficit quadrupled in March.

Hong Kong, Sydney and Wellington were closed for the Easter holidays.

With markets in most of Europe and the United States closed on Friday and Monday, business was thin as investors look ahead to the release this week of preliminary manufacturing data from around the world as well as US retail and house price figures.

In Tokyo, the government said Japan’s trade deficit hit $14 billion in March, compared with a shortfall of 356.9 billion yen a year ago.

The huge deficit came as a weaker yen increased the cost of imports, especially of fossil fuels, and was compounded by the fact consumers rushed to buy ahead of the April 1 sales tax hike.