US commerce secretary spells out economic facet of ‘pivot to Asia’ 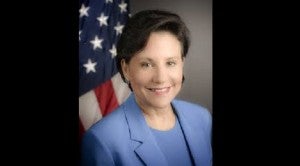 WASHINGTON, DC — U.S. Secretary of Commerce Penny Pritzker April 17 laid out the commercial-economic angle of the Obama Administration’s “rebalance”—better known as “pivot”– to the Asia-Pacific region.

The White House sees, the Asia-Pacific as a region of “tremendous opportunity” for United States businesses and workers.

From Pritzker’s viewpoint, the region is home to an emerging middle class that is eager for American products and services, having nearly 60 percent of global GDP, the world’s fastest growing economies and half of the world’s population.

The US commitment includes building and strengthening regional mechanisms like the Trans-Pacific Partnership (TPP), the Association of Southeast Asian Nations (ASEAN) and the Association for Asia-Pacific Economic Cooperation (APEC).

Pritzker also announced her third trip to the region since taking office nearly 10 months ago.  She will travel to Vietnam, the Philippines and Burma in conjunction with a delegation of U.S. CEOs and the U.S.-ASEAN Business Council in early June, underscoring U.S. government support for high-level private sector engagement in the Asia-Pacific region.

Pritzker also stated that the Department of Commerce will expand its overseas resources to help U.S. businesses navigate additional global markets and sell their goods and services to customers all over the world.

The Department’s International Trade Administration will add a total of 68 new positions and open offices in five new countries, including its first in Burma.

The expansion is largely focused on fast-growing markets in Asia and sub-Saharan Africa. Pritzker announced that ITA’s U.S. Commercial Service will be adding offices in Burma and Wuhan, China. Additional staff will be added at 10 other Asian posts.

The U.S. Commercial Service will more than double its presence in Africa, opening offices in Angola, Tanzania, Ethiopia and Mozambique, and expanding offices in Kenya, Ghana, Morocco and Libya. Europe, the Middle East and the Western Hemisphere will also see growth in staff numbers.

ITA, working with the U.S. State Department, will begin implementing its expansion in the coming months.

US ‘pivot’ to Asia gaining strength—admiral

Pentagon chief to stress US ‘pivot’ in Southeast Asia tour‎

Pivot to Asia could be hurt by US budget cuts