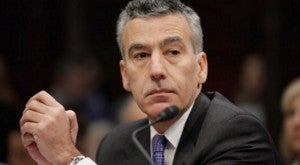 US Ambassador to the Philippines Philip Goldberg. AFP FILE PHOTO

MANILA, Philippines—The US Federal Aviation Administration announced Thursday it has upgraded its rating of Philippine aviation safety to Category 1, clearing the way for the expansion by Philippine air carriers of their operations in the United States.

The announcement came hours before the expected announcement by the European Union that budget carrier Cebu Pacific would now be allowed to fly into European airspace.

The US announcement, while expected by the Civil Aviation Authority of the Philippines, came as a surprise as it was widely anticipated to be made by US President Barack Obama during his state visit later this month.

The upgrade paves the way for the expansion of Philippine carriers’ flights to the US.  Philippine Airlines, which was allowed to fly to Europe last year, already flies to the US, although operations are limited to the country’s West Coast. Cebu Pacific earlier said it was also keen on flights to the US destinations like Hawaii.

The US Federal Aviation Administration downgraded the Philippines to Category 2 in early 2008, signaling that the country “lacked laws or regulations necessary to oversee air carriers in accordance with minimum international standards.”

In a statement on Thursday, the FAA said the restoration of the Philippines to Category 1 status was based on a March review of CAAP, whose current leadership also helped the country exit a European blacklist in July last year following its compliance with International Civil Aviation Organization, or ICAO, standards.

“A Category 1 rating means the country’s civil aviation authority complies with ICAO standards. With the International Aviation Safety Assessment Category 1 rating, the Republic of the Philippines’ air carriers can add flights and service to the United States and carry the code of U.S. carriers,” FAA said.

The Transportation Department, meanwhile, noted that the upgrade means greater tourism and trade relations between the Philippines and the United States.

“This upgrade cements a landmark era in the Philippine aviation sector.  From one major achievement to another in a span of less than two years, the country has made great strides in enhancing its aviation industry to one that is at par with the best in the world,” Transportation Secretary Joseph Abaya said in a statement.

“We congratulate the [CAAP] for a job well done in ensuring the lifting of the ICAO’s significant safety concerns, the lifting of the European ban on local airlines, and now, the FAA upgrade to Category 1.  Truly, your accomplishments prove that good governance and competent leadership will be the legacy of President Aquino’s Daang Matuwid,” he added.

Philippine Airlines would immediately benefit from the FAA upgrade since it already flies to the US.  Apart from adding new routes, the upgrade would allow Philippine Airlines to replace aging aircraft currently being used with newer, fuel-efficient planes like the Boeing 777s, allowing the carrier to save on operating costs.

Philippine Airlines president Ramon Ang said in a text message that the airline would expand US operations.

PH hopes for positive news from visiting US FAA officials

Read Next
Dovish Fed minutes send US stocks up more than 1%
EDITORS' PICK
‘A greener, cleaner tomorrow’: A how-to guide for Filipinos who want to help with today’s energy crisis
Get exciting deals and discounts when you download the new McDonald’s App
US Navy helicopter crashes in PH sea; 5 crew members rescued
Batangas execs, Taal evacuees thank House; hopeful on rehab efforts
Bato to reapply for US visa if Duterte wants him to join US-Asean summit
SM continues to send relief assistance to remote towns in Batangas
MOST READ
US Navy helicopter crashes in PH sea; 5 crew members rescued
Taal’s sulfur dioxide emission increases
No time for revelry; Tagaytay instead plans for alert level 5
Brazilian tennis player banned for life for match-fixing
Don't miss out on the latest news and information.