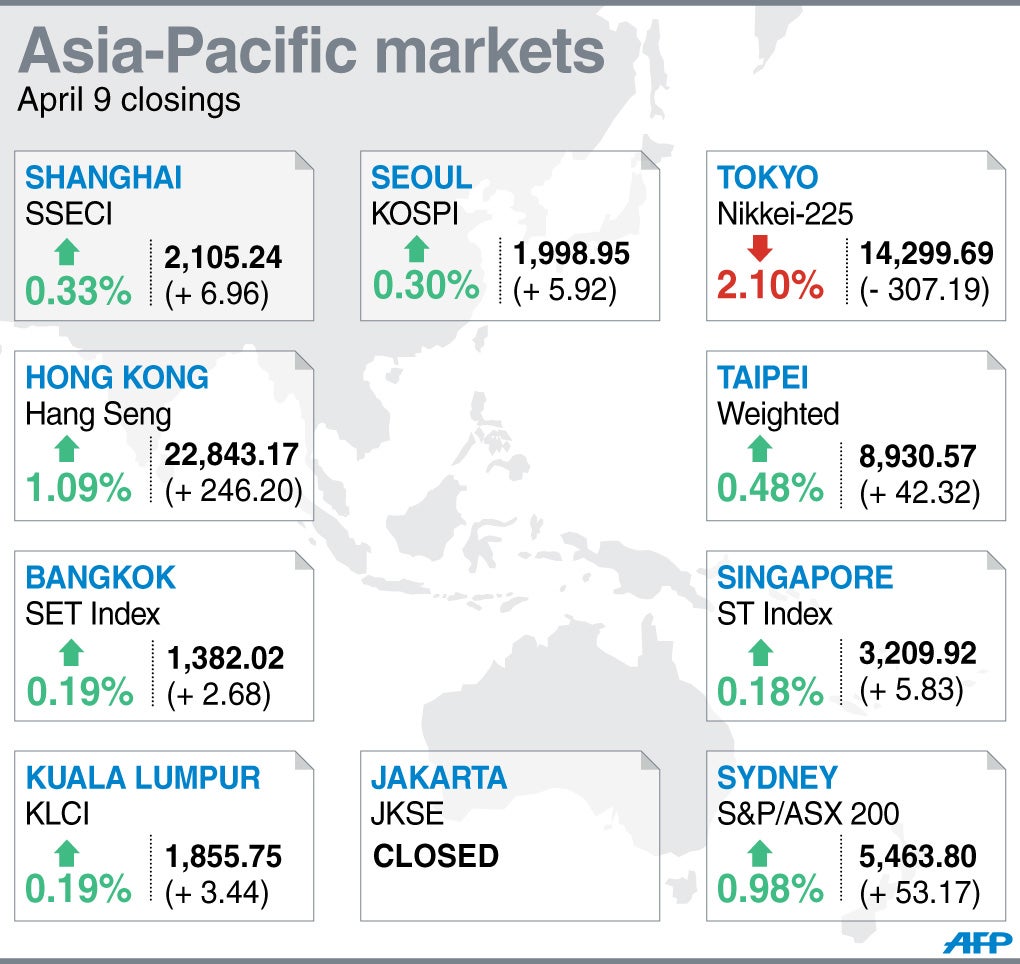 HONG KONG—Asia’s markets mostly rose on Wednesday following a slight rebound on Wall Street but Tokyo took another hit from a stronger yen.

Oil prices eased after surging on Tuesday on renewed fears about tensions in Ukraine.

Sydney ended 0.98 percent higher at 5,463.8, its highest close since June 2008, supported by a surge in retailer David Jones after it received a massive takeover offer.

The upmarket department store rose 23 percent to Aus$3.91 after recommending that shareholders accept a buyout from South Africa’s Woolworths that values it at Aus$2.15 billion (US$2.01 billion).

In New York Tuesday the three main indexes enjoyed a pick-up after suffering three successive sessions of losses led by the Nasdaq, as investors feared that big-name tech firms such as Facebook, Google and Tesla were overpriced.

The Nasdaq—which has lost more than five percent since the start of March—rose 0.81 percent, while the Dow edged up 0.06 percent and the S&P 500 rose 0.38 percent.

In Japan the Nikkei sank for a fourth straight session as the yen strengthened after central bank chief Haruhiko Kuroda dismissed any hopes of further monetary easing soon.

Kuroda told a news conference Tuesday the economy was getting back on track as Prime Minister Shinzo Abe’s big-spending, easy-money policy drive kicks in.

He also sought to allay fears over the higher sales tax that began on April 1, saying it would not hurt a nascent recovery despite warnings to the contrary.

That sent the yen higher Tuesday, sitting at 101.75 to the dollar late in New York, compared with 102.56 earlier in the day in Tokyo. On Wednesday in Asia the dollar clawed back some gains to sit at 102.00 yen.

Adding to pressure on the euro were comments from IMF chief economist Olivier Blanchard, who said European Cental Bank action was needed soon to avert deflation in the eurozone.

“They are considering a number of measures (including) negative interest rates, quantitative easing, securitisation programmes of various sources,” he told journalists at the launch of the IMF’s World Economic Outlook report.

“I think they should all be looked at, and I know that the ECB is looking at them,” he said. “And we hope that they will implement them as soon as they’re technically ready to do so… sooner is better than later.”

Oil prices were lower after spiking Tuesday on events in Eastern Europe.

NATO on Tuesday warned Russia against further intervention in Ukraine after pro-Kremlin militants in the cities of Kharkiv, Lugansk and Donetsk seized government buildings. The activists vowed to vote on joining Russia in an echo of last month’s referendum in Crimea that led to it being absorbed by Moscow.

With Ukraine a key conduit for Russian gas to Europe, traders fear that any disruption to supplies will send oil and gas prices skyrocketing.

New York’s main contract, West Texas Intermediate for May delivery, eased 40 cents to $102.16 a barrel in afternoon Asian trade. Brent North Sea crude for May was down 49 cents to $107.18.

— Manila was closed for a public holiday.