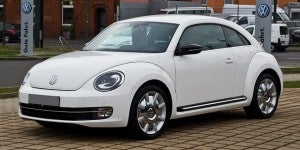 MANILA, Philippines—Ayala Auto Holdings Corp. has brought back to the Philippines the iconic “Beetle” to add to the growing line-up of Volkswagen vehicles being made available in the country.

A shipment is expected to arrive in two months’ time to serve the initial demand, as there have been at least 20 pre-orders of the Beetle as of Wednesday night.

“Our target market would be those who want to look at a fun, alternative car… we hope we can attract the younger generation now because many of our parents and ourselves were part of the old Beetle (generation). We hope to rekindle that,” Orbeta added.

Orbeta however declined to cite the number of Beetle units slated to arrive within the next two months, nor did he disclose targets for the company as a whole as he admitted that “supply is still erratic… not stable.”

There are remaining reservations that have yet to be served, he added.

“We have a soft target. But we’re now doing market testing… we’ll see what will sell then we’ll ramp up volumes depending on that. We hope to be able to hit a few hundred,” Orbeta said.

Despite facing supply problems, Ayala Auto Holdings is set to put up two more company-owned dealerships within the year. It currently has one dealership at the Bonifacio Global City.

“We hope to open two more dealerships before the end of the year—one in Alabang and one in Quezon City,” Orbeta said.

It was only in September last year that the Volkswagen Group, the largest automotive manufacturer in Europe, reopened its doors in the Philippines, as the company targets to further expand and cement its presence in the Asia Pacific region.

“The time to come back to the Philippines is now. The ASEAN market, including the Philippines, is the next frontier for Volkswagen in the Asia Pacific Region,” Weiming Soh, executive vice president of Volkswagen AG said earlier.  “We are very excited to reconnect with the Filipino market, knowing how well loved Volkswagen is in the Philippines. Volks, being a status icon here, as it is around the world, is like no other car before or after.”

Currently available in the Philippines are the Volkswagen Touareg, Tiguan, Touran, Jetta, Polo, and the Beetle.