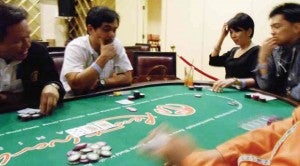 DURING the tutorial sessions at Resorts World Genting Club, AIM alumni learn the rules of Texas Hold ‘Em Poker. Chips used during the tournament are not convertible to cash. Player who collects the most chips win.

The dealer distributed cards to each player who subsequently chimed in their bets, slowly or sometimes instantly escalating their bets until some are challenged to put in everything they’ve got.

Even as far back as 20 years ago, students can remember that one of the highlights of their education involved one late night inside the school campus where all students were required to play a game of poker.  It wasn’t exactly explained why they were asked to bet a small amount of real money on the game but no one seemed to complain.  Of course, for majority of the young twenty something students taking their Masters in Business Management (MBM), it was a break from the otherwise rigorous and stressful requirements in school.

On hindsight, it becomes clear that this seemingly unrelated subject hoped to teach a few lessons to future business leaders:

In negotiating a business deal, one does not reveal all his cards immediately.  There is often a need to keep some aces hidden until the appropriate time.  In poker, it is possible to win a game by managing one’s act.

It is hard to succeed long term if one is always faking it.  In poker, many players lose because they bluff too much.

In any business, it is imperative to know one’s competitors.  In poker, one needs to understand whom he is up against.

Starting a business requires some risk-taking.  But it is important to make calculated moves.  An occasional game of chance within a reasonable budget may be acceptable, as long as a player doesn’t get addicted or ruin his life as a result.

This is harder than it sounds but it often spells the difference between total loss and self-preservation.

Annual AIM poker nights that started within the campus have evolved into more sophisticated versions that now include fund raising objectives for the alumni fund.  Nevertheless, these events not only serve to bring back old memories but they also rekindle friendships and camaraderie among former classmates who sometimes also become one’s business or work partners.  As the popular adage explains, it’s not always what you know that matters but whom you know.