Imports eased to $61.7B in 2013 on electronics slump | Inquirer Business
Close
menu
search 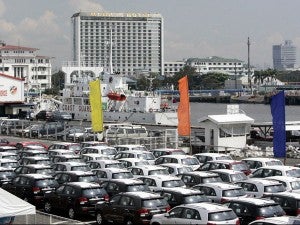 Hundreds of imported cars mostly from Japan and South Korea are parked waiting for deliveries at a Manila pier on Nov. 10, 2011. AP FILE PHOTO

The Philippine Statistics Authority (PSA) reported Tuesday that total imports for the year amounted to $61.71 billion, down year on year by 0.7 percent.

For the month of December, imports fell 0.1 percent to $5.29 billion as electronics shipments shrank 7.3 percent to $1.19 billion during the month.

The drop in Philippine imports followed a relatively weak global demand, especially for non-essentials like electronics. This pushed export-oriented firms in the country to import less inputs for production. Economists said that in times of economic uncertainties, consumption tend to focus more on basic goods and less on non-essentials.

Raw materials and intermediate goods, led by electronics, accounted for nearly 40 percent of the total import bill in December, while capital goods composed nearly a fourth.

However, sluggishness of the external environment pulled down imports.

The contraction in imports in 2013 was way off the government’s official target of a 12-percent increase.

Balisacan, however, expressed confidence that global demand would rise this year. As such, Philippine imports could jump as well. Under the 2014 macroeconomic assumptions of the government, imports are expected to rise 6 percent this year.

China was the biggest source of imports in December at $776.49 million, up 30 percent year on year. The United States followed, accounting for $575.79 million (down year-on-year by 31 percent). Other top sources of imports for the month were South Korea (up 10 percent to $422 million), and Japan (down 11 percent to $405 million).

Meantime, the PSA also reported that combined imports from other member-countries of the Association of Southeast Asian Nations (Asean) amounted to $1.2 billion, up year-on-year by 7.3 percent

Policymakers are urging the private sector to expand trade with other Southeast Asian countries to aid in the realization of the an integrated Asean economy.

Under the Asean integration framework, Asean is intended to be marketed to foreign investors as a single bloc rather than individuals countries. Also, barriers to the free movement of goods, labor and investments within the region are intended to be lifted.

The original target for the implementation of Asean integration was 2015. However, policymakers now believe that while member-countries may meet some of the requirements of integration by 2015, full integration will not happen until 2020.—Michelle V. Remo

Read Next
Exporters set revenue target for goods at $92B
EDITORS' PICK
Japan brings back virus restrictions over Omicron surge
Gear up and get ready to play with Yamaha Mio Gear
Over 3 Million worth of prizes to be won at Smart Padala’s SENDali Manalo Promo!
Uproar over no vax, no ride policy: Maybe it’s time for gov’t to say sorry—Bello
97% of COVID-19 beds at PGH currently occupied
Acer starts the year off strong with the Aspire Vero National Geographic Edition
MOST READ
1Sambayan names 7 aspirants in its 2022 Senate lineup
Emma Stone calls Andrew Garfield a ‘jerk’ after he ‘lied’ about his ‘Spider-Man: No Way Home’ appearance
Guevarra to Acosta: Obey rules on unvaccinated
PH to import 60,000 tons of fish to cover shortage
Don't miss out on the latest news and information.