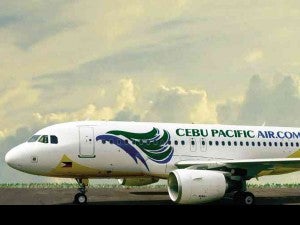 Should the deal be approved, Cebu Air, a unit of Gokongwei-led conglomerate JG Summit Holdings, could end up owning 100 percent of Tigerair Philippines, Civil Aeronautics Board executive director Carmelo Arcilla said in an interview Friday.

The proposed acquisition would need to pass several regulatory hurdles, including approval by the Securities and Exchange Commission and the CAB, which is looking into the deal’s competitive and legal implications, Arcilla said.

“It is still under evaluation,” Arcilla said, adding that a decision by the CAB may be ready within this month.

“We are looking at its effect on routes, traffic and slots. There is also the legal side,” he said.

Cebu Pacific is seeking to widen its market presence amid stiff competition from rivals like flag carrier Philippine Airlines and the local units of Malaysia’s AirAsia Bhd. AirAsia is separately seeking to increase its minority stake in AirAsia Zest.

Cebu Pacific flew half of the 15.41 million passengers that took domestic flights during the first nine months of the year, data from the CAB showed. The remainder was divided among five other carriers, led by chief rival Philippine Airlines and its sister company, PAL Express.

Tigerair Philippines, which has been posting uneven financial results, cornered 4.7 percent of domestic air travel during the period. In terms of international flights, Cebu Pacific is the second biggest local carrier at 16 percent while Tigerair Philippines has about 1.5 percent in terms of passenger volume, the data showed.

But he said they were unable to disclose any definite agreement at this time.

Tigerair Philippines CEO Olive Ramos said she was not privy to any discussions.

Tigerair Philippines, which operates at airports in Clark and Manila, was formed after Tiger Airways acquired a 40 percent stake in Southeast Asia Airlines, which was later rebranded.

Cebu Pacific, with a fleet of 48 medium-range and long-range aircraft, is the sixth-largest among 47 Asia-Pacific budget carriers while Tigerair Philippines ranks 40th, data from Center for Aviation showed.  The largest is Indonesia’s Lion Air.

Tigerair Philippines has sought to differentiate itself from the competition by offering more leg room and giving options, for a fee, for passengers seeking more than the typical “no-frills” services associated with the budget airline business model.

While its current fleet is among the smallest among local carriers, it plans to boost this to 25 planes in three to five years, Ramos said in a previous news briefing.