A weekend dream drive with the Porsche Cayman S 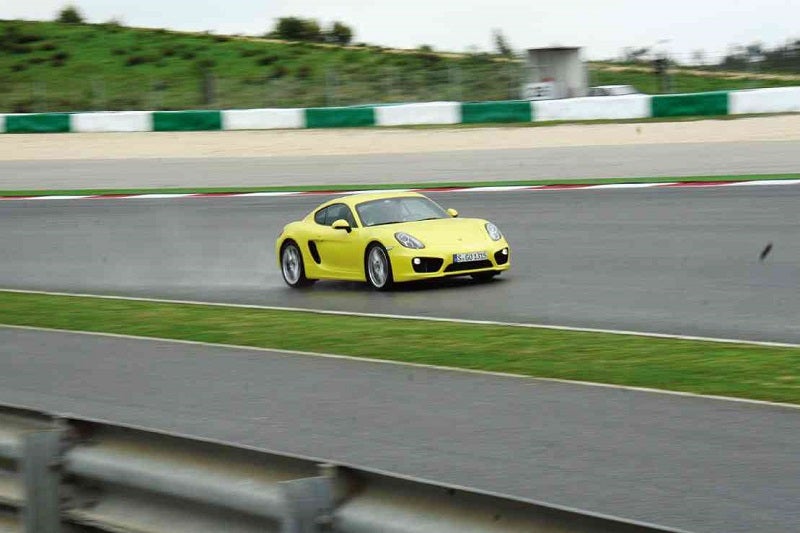 THE CAYMAN S is perfect for anyone looking for a smart, supersharp and practical everyday sports car.

Metro Manila isn’t the friendliest of places to own a sports car. The BIR will most likely go after you. And that’s assuming you can live past the traffic, and getting in and out of a low-slung sports car without knocking your head on the roof or dislocating your knees, which has happened to me getting in and out of a Lamborghini Gallardo. Yet I’ve had the pleasure of driving others people’s sports cars on our hallowed (hole-y?) Metro Manila roads: a Lamborghini Murcielago, a Ferrari F430, a variety of Porsche 996 Turbos, a 997 GT3 Mk1, and now this, the Porsche Cayman S.

I drove the Cayman S earlier this year in Autodromo de Algarvae  as well as the winding roads around Faro both in Portugal. The roads were beautiful, the Cayman amazing; 270 kilometers per hour on the highways and the cops loved it. But on the undulating, rain-soaked track fondly known in racing circles as Portimao, the Cayman was a tad too scary for me. The midship layout meant that grip was absolute; but in the wet, shod with dual compound Pilot Sport Cups, the Cayman gave a most memorable, sphincter-tightening drive all throughout my five laps which, on a proper GP track, felt like an eternity, the tail swinging and wiggling constantly, the front end squirming and constantly seeking out grip. Great car, but it has too much talent for me, which only emphasized my skill, or lack thereof. 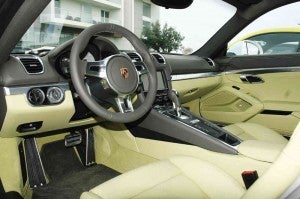 INSIDE the Cayman’s simple yet functional and classy interior

showed me their Cayman S. It had a lot of the options that I like: 19-inch wheels shod with rain-friendly Goodyear Eagle F1 tires instead of the grippier but more nervous Michelin Pilot Sport Cups in 20-inch wheels; PDK transmission and sport seats instead of the hard-core bucket seats from the Club Sport package which also comes with a manual transmission, manual steering wheel adjustment and fixed back bucket seats in carbon-fiber plus the aforementioned 20-inch wheels. And it was finished in a bright yellow hue which looked like my wife’s banana doll. So I jokingly asked Coyiuto when I’d get to test-drive it locally, which is always a revelation when compared to driving it abroad. He looked at me, looked up wondering and turned to me to say: “How about next weekend, during your birthday?”

As my “other” boss and mentor Vernon Sarne of Top Gear had trained me to do, I simply said sure, but the excitement in my eyes couldn’t be hidden at all. Had there been nobody else, I might have went crazy wild and kissed Coyiuto!

Fast forward again by  one week, and the time comes to pick up the Cayman. It is an amazing car: There’s ample cargo space front and back; pop the hood and in place of an engine, there’s a deep boot you can stuff a midsized maleta or, in my case, my two laundry baskets. At the back, there’s a small space for a small gym bag and my laptop bag plus an umbrella. Practical enough, methinks, for everyday use. Except that it is the Christmas season, which is the worst-ever time to drive a sports car.

Thankfully, Porsche’s PDK dual-clutch transmission with its seven forward gears means driving in traffic is nonetheless convenient: no tired, aching  left leg. It is a tad jerky on first gear crawls, and the suspension is firm for all but the most ardent of driving fans. But the steering is simply sublime, electric or not. It feels alive, alert yet not darty and nervous; the brakes are a model of progression and feel. Even without ceramic brakes, the Cayman feels always in control, confident and composed.

Weaseling my way out of Metro Manila traffic, I head over to Tagaytay for a dream drive. On the highway, the Cayman feels refined enough, yet once the winding switchbacks of Santa Rosa and Tagaytay are in sight, the Cayman transforms into the most aggressive of hill climb machines. Slower cars are overtaken with ease, the suspension keeps roll, pitch and squat in check yet shrugs off most surface imperfections. Light rain and drizzle make other cars slow down, but the Cayman simply keeps getting better and better as the pressure piles up.

Yes, I have to admit I was driving quite like a hooligan up and down Tagaytay, so I apologize. But try driving a Cayman and hear the engine’s mechanical cacophony of noises rev up and down. You’ll be mesmerized, hypnotized and  inspired to drive faster, harder, more aggressively.

Ah yes, the engine. The Cayman’s engine isn’t too powerful, nor does it dominate the entire driving experience. It is ultraresponsive, revs flaring quickly past 3,000 revolutions per minute when you blip the throttle. It builds power linearly and progressively, just like a proper atmospheric engine. Working the PDK lever’s firm motion, you really feel like a race car driver piloting his machine to victory. The engine is, of course, a horizontally opposed six-cylinder engine or boxer engine or 180-degree V engine (take your pick) displacing 3.4 liters, with four-valve heads, direct fuel injection, dual overhead camshafts, producing 320 horsepower and 370 Newton-meters of torque. More than adequate; you know it’s not the fastest, but you’ll never  once think it’s slow.

Upon startup, there’s still a bit of that Volkswagen Beetle air-cooled engine note, as the ignition timing is on max advance to warm up the engine quickly, then the 3.4 lump settles into a fast idle at just under 1,000 rpm. It feels like a proper old-school engine: very mechanical and raw with  a hint of roughness. There’s none of the fabricated induction/exhaust noise you might hear from an Italian or Japanese performance car. No, the Porsche is a car that reminds you of when men built and worked on their own cars, rather than simply bought and then forgot about them.

Quite a sight in traffic

But in traffic, it is quite another story. Everyone stares and looks, particularly children who fancy its yellow color more than the fact that it’s a Porsche. Which is good, as people who drive fancy cars are looked down on by other adults as insecure wankers and tossers, to quote Jeremy Clarkson of Top Gear fame.

I also took the Cayman to my laundry shop with two baskets full of dirty, smelly laundry which easily fit into the front compartment. The cleaning lady must think I’m some dirty young businessman with his hands involved in the PDAF scandal, for the Cayman was the fourth new car I’ve brought to the shop in the last three weeks!

Parking is also tough, not because the Cayman is big but because its doors are. You need far more space than a typical parking slot to be able to fit in easily and, crucially, to open the door for anyone modestly larger than the average to fit. This is perhaps the biggest bane to sports car ownership: the large doors. Perhaps the Mercedes-Benz SLS and Lamborghini Aventador, with their upward opening doors, are onto something?

Some foibles? No Bluetooth Telephony, no USB connectivity. A rather poor 6.5-kilometer per liter combined fuel consumption, but that’s probably due to too much idling in traffic or going for the redline in equal measure.

After four days and almost 300 km (I drove the Cayman everywhere all the time and in all conditions while I had it), my second encounter with the Cayman was better, sweeter and more fulfilling. The sound of the flat-six as it bounced off the rev limiter (I forgot I was in manual mode and hence forgot to use the shift) still echoes in my heart and mind as an almost-spiritual experience. I completely forgot about my birthday (didn’t even celebrate it) and was tickled pink to be driving around in a Cayman, despite the traffic. Driving for extended periods (four hours or more in traffic) left me feeling only slightly tired and numb, just like in  typical luxury sedans, so you know it’s easy and painless to live with.

My neighbors, almost all of them car enthusiasts as well, came over to take a look, and of course I showed them  the Cayman’s simple yet functional and classy interior. We all wanted to see the engine but, alas, you can’t access it easily.

I still prefer a 911 for purely subjective reasons, but for anyone looking for a smart, supersharp and surprisingly practical everyday sports car, the Cayman S is perfect. I miss it now.