Comcast gets ‘Beacon of Democracy’ award 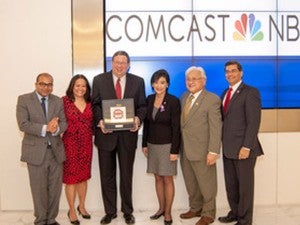 WASHINGTON, DC—Comcast NBCUniversal received the Beacon of Democracy Award from APIAVote for serving as “a source of guidance and inspiration to increasing civic engagement.”

“It was quite evident when reviewing APIAVote’s accomplishments in 2012 that Comcast NBCUniversal was always there as our partner,” said Toby Chaudhuri, co-chair of APIAVote.

“They were instrumental providing support to our Norman Y. Mineta community civic engagement training programs in 14 states. They offered unprecedented media resources and coverage as well as the partnership with the Center for Asian American Media for the production of our public service announcement campaign “What Do You Want?”

Congresswoman Judy Chu, chair of the Congressional Asian Pacific American Caucus, presented the award and said, “I congratulate Comcast for its well-deserved APIAVote Beacon of Democracy Award! Time and time again, Comcast has gone beyond the call of duty to ensure that Asian Americans and Pacific Islanders (AAPIs) are not left out of our democratic process.”

Chu said that in the last election cycle, Comcast gave a record number of resources to APIAVote to ensure one of the highest Asian American and Pacific Islander voter turnouts ever.

Comcast also funded the first national multilingual AAPI poll, which launched the discussion and inclusion of the AAPI electorate in campaigns and media coverage.

David Cohen, executive vice president of Comcast Corporation, replied, “We thank APIAVote for recognizing our efforts, especially those of MSNBC, to produce extensive coverage of the Asian American vote in the 2012 Election cycle.”

Cohen said their coverage was “intentionally inclusive,” from panels and live interviews conducted by Melissa Harris-Perry and Chris Jansing and Co., to Richard Lui moderating the APIAVote Presidential Town Hall in Fairfax Virginia (which was distributed online through MSNBC.com.)