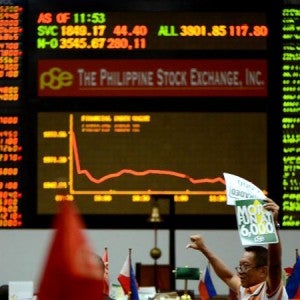 MANILA, Philippines—Tiu-led resort operator Discovery World Corp. sank on its trading debut on Thursday, pulled down by weak market sentiments and reported damage to a recently acquired resort in Coron, Palawan, because of Supertyphoon “Yolanda.”

The company closed down 11.59 percent to P2.90 a share, the session bottom. It opened at the offer price of P3.28 a share before declining.

“It was expected. The market sentiment wasn’t that good and it [IPO] wasn’t well taken up,” said Joseph Roxas, president of stockbrokerage firm Eagle Equities Inc., adding that concerns were also raised about the “high” valuation of the company.

Discovery sold 168 million shares at P3.28 each to raise P551 million. Post-offering, the company would have a public float of almost 27 percent.

The company also cited damage to its Club Paradise resort in Palawan after Supertyphoon Yolanda barreled through Visayas last Nov. 7,   killing thousands and causing significant damage to infrastructure. The company said the resort might need to be closed for a few weeks as repairs were being conducted.

Discovery, whose main asset is Discovery Shores on Boracay Island, had sold shares from Nov. 8 to 14.

Proceeds from the IPO, meanwhile, would help fund new investments.

It detailed plans to acquire Palawan Cove Corp., an existing company developing a resort in San Vicente, Palawan. The impact on revenues would only be felt by 2017, it said.

It also plans to invest in the cruise business, through Discovery Fleet Corp.

Based on its filing, the company was expecting net proceeds of P516.45 million from the IPO. Of the amount, P120 million will be used for Discovery Fleet and Palawan Cove.

It also plans to allocate P325 million to pay off debts and P71.35 million for working capital purposes. All the funds are expected to be disbursed in the current quarter.