State firm hopes to book as much as P1B in profit this year alone
By: Riza T. Olchondra - @inquirerdotnet
Philippine Daily Inquirer / 07:30 AM November 07, 2013 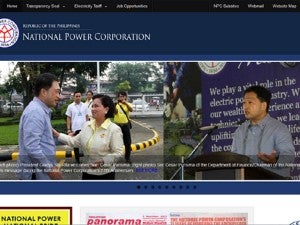 MANILA, Philippines—National Power Corp. (Napocor) may be able to work with less state funding next year as it recovers financially, boosts efficiency, and streamlines its workforce as it continues to privatize its assets.

Ma. Gladys Cruz-Sta. Rita, the first female chief of the state-owned firm, said in a briefing that Napocor’s proposed budget for 2014 would amount to P14 billion, down from the P15 billion sought for this year.

Part of the reason for the smaller requirement is better financial health as the agency aims to book a P1-billion profit this year, from the P398 million reported in 2012 under former Napocor president Froilan Tampinco.

From 2009 to 2011, Napocor posted net losses reportedly due to poor fiscal management.

Now, Napocor aims to boost its collection rate to 46 percent from the current 33.7 percent by working more closely with electricity cooperatives and the local government units they serve.

Much of Napocor’s budget will still go to buying fuel for power facilities installed in missionary areas under the agency’s small power utilities group (SPUG), Sta. Rita said as she marked her first 90 days with the state firm.

Napocor is also spending P154.8 million for new diesel engines as part of a so-called refleeting program for its diesel-powered power plants.

About 20 engines will be used to upgrade facilities in remote areas that are not yet connected to the country’s power grid.

Sta. Rita said the refleeting program was originally scheduled for 2015, but the agency later reset it to 2014.

By upgrading the diesel power plants, Napocor will be able to save P261 million in three years, she added.

The company’s thrust to privatize assets will likewise free up resources that are presently used to maintain the power generation facilities still under Napocor, Sta. Rita said.

As more assets are privatized, Napocor will be able to streamline its workforce, she explained.