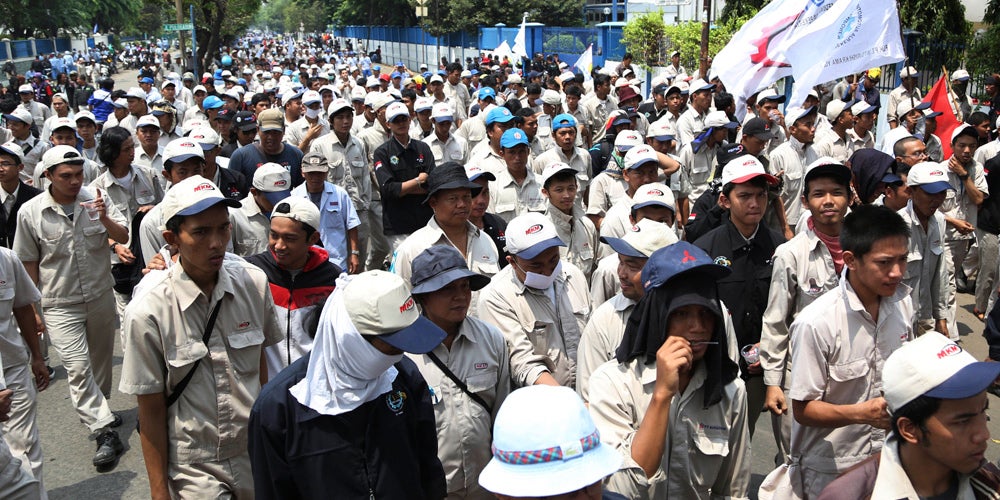 JAKARTA, Indonesia—Tens of thousands of workers went on strike across Indonesia Thursday, in the latest industrial action to hit Southeast Asia’s top economy as its citizens seek a greater share of the spoils from stellar growth.

But the police estimate of participation in the strike was only around 100,000, far below the three million unions had predicted, taking some pressure off the government and employers who are seeking to limit wage increases.

Unions earlier claimed two million downed tools on day one of the two-day nationwide strike, but crowds appeared small in many cities and police forces across the country mostly reported only minor walk-outs.

The strike was called for workers to demand hefty pay rises as the cost of living skyrockets due to surging inflation, which has been driven up in recent months by an unpopular fuel price hike.

While the industrial action was smaller than anticipated, it still closed many factories around the country that produce everything from clothes to electronics, often for international companies.

By far the biggest strikes were in Jakarta and the industrial hub of Bekasi just outside the capital, with around 60,000 people walking out in the area.

Security was tight with more than 150,000 police mobilized across the country.

In Pulogadung industrial estate in East Jakarta, thousands of workers in uniform marched past deserted factories, led by a truck with people shouting from loudspeakers.

“I am not asking to live in a castle or sleep on a bed of gold, just for what we deserve from working so hard to contribute to the economy,” said Achmad, 46, a welder who, like many Indonesians, goes by one name.

Elsewhere, police said around 5,000 took part in the strike in Surabaya in East Java province, and 1,000 downed tools in Makassar on the central island of Sulawesi.

National police spokesman Ronny Sompie told AFP: “There were more than 100,000 workers who went on strike today, and most of them were also part of labor protests across Indonesia.”

He added most of the rallies took place in industrial areas and were peaceful.

The lower-than-expected turnout will be welcomed by employers, who are fighting to limit big salary rises they claim are denting profits and could lead foreign investors to take their business to neighboring countries.

The government has also raised concerns about soaring wages, particularly at a time when growth is slowing, and there has been recent economic turbulence due to fears that the US may reduce its stimulus programme.

Nevertheless, many workers remain concerned they are not being fairly rewarded for their contribution to the country’s strong growth, which has come in at over six percent in recent years.

“Many workers who could not afford their rents have had to move out of their homes and live under bridges and in sewers,” said Said Iqbal, chairman of the Confederation of Indonesian Workers Union.

“They are eating instant noodles instead of rice.”

Workers say they have been hard-hit by the government’s decision in June to raise petrol prices by 44 percent and diesel by 22 percent, a move aimed at reducing subsidies that were gobbling up the state budget.

Employees are demanding “just a decent pay raise to compensate for inflation,” said Iqbal, adding: “We laborers have contributed so much to the economy, why are we trampled upon?”

Strikes and protests by Indonesian workers have been on the rise as they demand higher wages at a time when the economy is booming.

Industrial action typically heats up in October and November as local governments decide on minimum wages for the following year in their areas.

Workers in Jakarta this year received a 44 percent increase in minimum salaries to 2.2 million rupiah ($200) a month, and others across the country have also received sizable raises.—Arlina Arshad

No opportunity to talk with Robredo — Makabayan