US stocks close October in the red 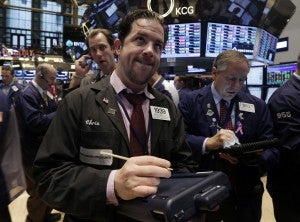 Despite the day’s losses, the markets cruised through a dramatic October, marked by a cliffhanging Washington battle over the budget and the debt ceiling, as well as the 16-day partial government shutdown.

Earnings returned to focus after the Federal Reserve on Wednesday maintained its aggressive monetary stimulus policy in a widely expected decision.

ExxonMobil reported an 18 percent fall in profit to $7.9 billion, but the biggest US oil company beat expectations on higher oil and gas output despite weakness in the refining segment. The Dow member’s shares rose 0.9 percent.

Facebook fell 2.4 percent after signaling that it sees usage weakness among young teens, a prime market for the social-networking giant.

Cosmetics company Estee Lauder lost 0.6 percent despite besting expectations by three cents at 76 cents per share and raising the range of its earnings guidance. The company is “well positioned for the important holiday shopping period,” said chief executive Fabrizio Freda.

But another cosmetics company, Avon Products, plummeted 21.9 percent after disclosing that US agencies are seeking a penalty of a “magnitude significantly greater” than the company’s proposal to settle a foreign bribery investigation.

Oil company ConocoPhillips edged up 0.1 percent after earnings rose 38 percent to $2.5 billion. The company said it was on track with some $8.9 billion in asset sales and with efforts to grow oil and gas production by 3-5 percent.

Bond prices fell. The yield on the 10-year US Treasury rose to 2.55 percent from 2.53 percent Wednesday, while the 30-year advanced to 3.64 percent from 3.63 percent. Bond prices and yields move inversely.