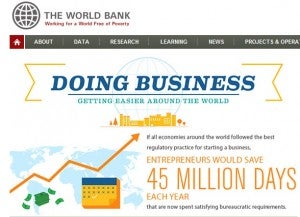 MANILA, Philippines–The Philippines posted a 30-spot jump in rank in the World Bank’s latest “Ease of Doing Business” report–the most for any country covered by the multilateral lender.

The report released on Tuesday, Manila time, showed the Philippines was now 108th in the world in terms of the ease of doing business, up from 138th last year.

The country showed improvements in seven out of 10 indicators tracked by the World Bank, a turnaround from last year’s performance, when the country slipped in seven indicators.

The biggest improvement was seen in the Resolving Insolvency indicator, where the country’s rank improved 65 spots to 100th in the world. Gains were also seen in indicators for Getting Credit, Electricity, Paying Taxes, Cross-Border Trading, Dealing with Construction Permits, and Registering Property.

Declines were reported in the indicators for Starting Businesses, and Enforcing Contracts. The country’s rank for the indicator on Investor Protection was unchanged.

The World Bank said the gains were made due mainly to reforms implemented by the Aquino administration. The National Competitiveness Council, which leads efforts in improving the ease of doing business in the Philippines, wants the country to be in the top-third of country rankings by 2016.

The Philippines is now 7th in Southeast Asia, up from 9th in last year’s report. The region is led by Singapore, which was ranked first in the world by the multilateral firm.