Kim Henares: We have yet to send one to jail | Inquirer Business

Kim Henares: We have yet to send one to jail 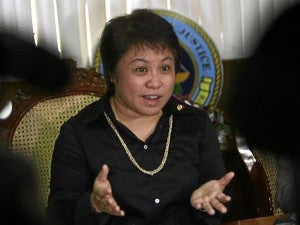 No Filipino has ever been sent to jail for evading taxes.

While at least one tax evader has been convicted with finality by the courts (that person is now a fugitive), no one has spent time behind bars for this crime that robs the country of much-needed resources for critical social services and easing poverty.

Kim Jacinto-Henares wants to change this in the two years and eight months remaining of the administration of President Aquino.

For the most part, the head of the Bureau of Internal Revenue (BIR) has achieved the most important goals that have been set for the agency once seen as one of the most corrupt in the entire government bureaucracy.

Tax collections as a percentage of the country’s total economic output have been raised to levels never seen before, thanks to vigorous enforcement and a “reverse name-and-shame campaign” where lists of top taxpayers in each industry group are published in newspapers every week.

The Philippines has now obtained the long-sought-after investment grade status from all major international credit rating agencies, all of which have credited the BIR’s tax-collection efforts for improving government finances.

And the BIR continues to file cases fortnightly—as ordered by Mr. Aquino when he placed Henares at the BIR’s helm— against suspected tax dodgers, both big and small, whether high-profile individuals or not.

“But we have yet to send someone to jail,” Henares said, in a tone of steely conviction that betrays just a hint of frustration.

The BIR has, after all, filed almost 200 complaints in the Department of Justice (DOJ) since its campaign began more than three years ago.

Only 10 of these complaints have made it past the prosecutors of the DOJ, to be actually filed as tax-evasion complaints in the courts. The rest are either still being processed or have been dismissed for lack of probable cause.

Frustrated with due process

“As a lawyer, I understand the need for due process,” she said in an interview.

However, sometimes there’s too much stress on giving criminals their due process rights rather than “the rights of the taxpayers who are being oppressed,” she said.

“Due process should work both ways, for the accused and the accuser,” she said.

Despite the reality of the notoriously slow justice system in the Philippines, Henares is firm in her conviction that the Aquino administration will make history by being the first to jail a tax dodger.

“Of course, it can be done in the time we have left—even if you factor in the appeals process—if the justice system moves fast,” she said.

Interestingly, Henares never thought she would end up collecting taxes for the government, given her background. She comes from a conservative Chinese-Filipino family and was schooled at two Chinese-Christian institutions, Immaculate Conception Academy and  Grace Christian High School.

Her parents wanted her to become a doctor, and she professes that medicine remains her “first love.”

But she ended up enrolling at the University of the Philippines in the mid-1970s, taking up civil engineering.

She admits that she “never got the chance to love” either the school or her course because her studious bent was frustrated by regular attempts of left-wing activists to indoctrinate her and other students during those restive times.

So she moved to the College of the Holy Spirit and took up economics and accounting simultaneously. This was unprecedented at the time, but Henares succeeded in convincing the school officials through dogged lobbying.

Being a self-confessed “nerd,” however, Henares couldn’t get enough of school and later enrolled at  Ateneo de Manila University Law School, where she met her future husband, Daniel “Danby” Henares, though they did not start dating until a decade after.

Many years later, Henares found herself working with the government, serving as a deputy revenue commissioner during the Arroyo administration. Even then, she already had a reputation as a straight shooter, according to her peers.

One of those who worked closely with her is former Finance Undersecretary Noel Bonoan, who now heads the local unit of the KPMG international accounting firm.

“Kim is very predictable in the sense that you know that she’ll do the right thing even if it’s not popular,” said Bonoan.

Even finance secretaries in the past “have been careful with what they ask of her,” he said.

“In fact, I would normally be the bridge to Kim in those instances,” added Bonoan.

According to Bonoan, however, the real Kim Henares is far from the image of policy and ideological rigidity that people ascribe to her.

“From my experience with her, she’s not so inflexible so as not to change her position when she sees there’s a good reason for it, despite the image she has,” he said.

“But you have to have a good argument. You have to present a good reason because she sticks to her guns,” he said.

And Bonoan adds an insight which may just be one of Henares’ strong suits given the Aquino administration’s anticorruption campaign: “Appealing to pakikisama (fellow feeling or group solidarity) just won’t cut it with her.”

Bonoan’s views are not that remote from Henares’ own description of her perceived hard-line stance, about which businessmen complain at how difficult it has been to deal with her and the BIR officialdom over the past three years.

“I’m not unreasonable,” insisted Henares. “But if you tell me that the BIR’s policy is wrong, be prepared to defend your position. I can’t accept arguments from businessmen who just want this or that regulation revoked,” she said.

But perhaps because she is perceived to be inflexible, many in the business community try to steer clear of her socially, something which Henares doesn’t seem to mind. “My real friends are still my friends, and I don’t like socializing anyway. I’d rather stay home in the evenings and read a good book,” she said.

“Her reputation in the business community is that she’s a very strong-willed person,” said Ramon F. Garcia, who heads boutique auditing firm, RFG & Co. “She’s very focused on what she wants and the results. We need a leader like that—someone who doesn’t mind what her critics say,” said Garcia.

As an auditor who is frequently consulted on tax issues, Garcia says he always advises his clients “not to bother the commissioner and instead solve the issue within the company.”

This is because of the perception that “if you ask her for something [whether it be a favor or leniency in tax issues], the opposite will be given to you.”

“So you might as well not bother her,” Garcia said with a chuckle.

“Sometimes people have frustrations with the BIR, especially on the part of clients or practitioners, but we know that her heart is in the right place,” he said.

And in what is perhaps the biggest sign that she has the trust and confidence of her superiors, Henares says neither President Aquino nor Finance Secretary Cesar Purisima has interceded for anyone by asking her to reconsider her tax policies.

“The President only asks for my opinion when it comes to tax and economic issues,” she said, adding that she also never volunteers advice beyond her scope of competence.

“And we never talk shop on weekends,” Henares stressed, referring to her regular sessions at the Malacañang firing range with the President.

“That’s when he teaches us—including the Presidential Security Group members—how to shoot. That’s his time to de-stress,” she said.

Despite this, Henares is a constant subject of rumors concerning her imminent replacement as BIR chief, supposedly because her policies have displeased one influential group or another.

(If rumors are to be believed, the Iglesia ni Cristo church is upset with Henares for her decision not to grant tax-exempt status to the sect’s massive multipurpose arena in Bulacan.)

“I don’t know if I’m going to be replaced,” Henares said with a shrug. “I haven’t been told by the President. And I serve only as long as he is happy with my performance,” she said.

Henares knows, however, that her stint in government will end sooner or later.

“I definitely won’t be here past 2016, so our goal is to make sure that the reforms we’re implementing will outlast us,” she said. “We want good governance to be the norm so that, after we leave, people will clamor for it. That will help make it permanent.”

Indeed, permanent policies of good governance amid transient public officials is what this country needs.