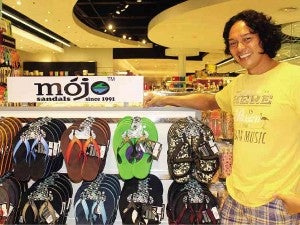 Jose Ignacio Cuerdo could very well be considered as a jack of all trades. Joey, as he is fondly called by the people close to him, is a tourism consultant, an outdoor events specialist, an outdoor athlete, and a businessman.

But among all the different hats he wears, Cuerdo is a cut above the rest as he happens to be the developer of the Philippines’ first outdoor sandal brand called Mojo.

“Mojo for me is my passion and love for the outdoors. It is here where the birth of ideas come, and it is also where the product of these ideas is tested,” says Cuerdo.

“Mojo therefore represents everything that the outdoors holds; freedom of space and movement, vibrant mornings in anticipation of new things to come, love in romantic sunsets, and the spirituality of an appreciative heart, acknowledging that everything is all a gift from above,” he adds.

Cuerdo grew up in Mindanao, where his backyard was basically a view of everything beautiful in nature.

At a very young age, he was exposed to caves, cliff jumping into rivers, exploring huge land areas on horseback and  … stopping to pick afternoon snacks from the nearby trees.

“It was only natural I guess that I would carry this passion for the outdoors throughout the rest of my life,” he recalls.

Cuerdo admits that being an avid outdoor sportsman became a great influence in developing his own footwear brand.

“I know what I need when I travel, and if the market does not have that need, then this need becomes a potential product which can be shared to the growing outdoors market,” he says. 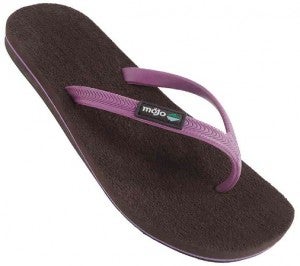 CUERDO admits that being an avid outdoor sportsman became a great influence in developing his own footwear brand.

Already an avid mountaineer back then, Cuerdo says they were using the regular slippers bought from department store for their campsite and post-climb activities.

“These parts of my adventures, the campsite and the bus ride back home, were when I realized the need for sturdy, slip-free, and comfortable sandals to answer my needs. From the bus stop to my house, my slipper straps would pop out of their sole, as I lugged my 50-kilo pack on tired dragging legs,” notes Cuerdo.

“The inspiration of Mojo sandals was really to make a product that I needed as an outdoorsman. During that time, I had a friend in our group who had an outdoor sandal from the US. Back then  it was very difficult to order things from the US and way too expensive for a student on a budget,” he further says.

With his experience on poorly-made, regular slippers, Cuerdo then decided to study sandal-making on his own. He acquired some shoemaker tools, rubber sheets, adhesives and straps using his very own allowance as a startup.

But still not being able to perfect the art of sandal-making, he recalls that the first sandal he made was a flop. Still, the young Cuerdo was determined to develop his own kind of sandals—something which is sturdy, slip free and comfortable.

“I set out to find a shoemaker who was willing to make the sandal I had in mind. From the corner of Shoe Avenue in Marikina, I began my search, knocking on doors of shoe makers, describing the concept. Around 10 houses down the road, one family was open to the idea,” he says.

“The rest, as the cliché will go, is history,” he notes.

Mojo slippers and sandals became the first outdoor sandal to surface in the local market in 1991. Its first offering was a prototype sandal with its special purpose for use at the campsite in the outdoors.

With its durability and design, Mojo products quickly spread its reach not only to the outdoor group but also to divers, making it truly the original and official sandal for the Philippine adventurer.

“There is definitely prestige in being dubbed as the Philippines’ first outdoor sandal brand. It is definitely an advantage. Being dubbed a pioneer, with the brand coming out in 1991 carries images of experience, durability and the concept of: ‘they-must-know-what-they’re-doing,’” Cuerdo says.

“Not everyone though can get to be a pioneer or innovator. And innovation is a continuous process. This I guess will be my biggest lesson, to stay focused and in the game. Being a pioneer will only be remembered by one generation, if you stay out of the playing field for too long and everything will be forgotten,” he adds.

Cuerdo operates as a single proprietor of his Mojo slippers and sandals for 15 years before the Mojo trade name and insignia, trademarked in 2007, was sold to Outward Adventure Wear Inc. (OAW Inc.) in 2011.

Today, Cuerdo owns and runs Outward Adventure together with his wife, Thea Yusay-Cuerdo,

With the help of new business partners, Cuerdo’s sandal company is now in continuous growth and expansion of its retailer lines.