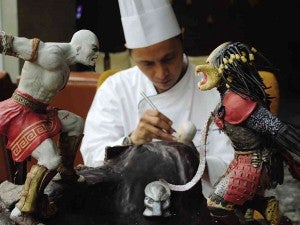 BALANE working on his award winning sculpture “Kratos vs. Predators.”

For a hotel sous chef who was relegated to the employee cafeteria after a tiff with his big boss, Christopher Balane came out of the experience with a unique calling to carve intricate Belgian chocolates, not to mention newfound fame for his creations and his recently well-deserved title as Marriott Hotel’s Chocolatier.

His most recent masterpiece “Kratos vs. Predators’ won Gold in the 2013 Philippine Culinary Cup.  But it was his “Avengers” 2012 Gold award in the chocolate category that caught the attention of Executive Chef Meik Brammer that led to Balane’s further training in the pastry kitchen.  This happened at the time he was assigned at the cafeteria for rebelling against management and for his work attitudes.

Ironically enough, it was also around his time at the canteen that he found himself bagging the 2012 “Leader of the Year” award at the hotel.  Recently, he was also nominated for the 2013 Mabuhay Awards given by the Association of Human Resources Managers (AHRM) in the Hospitality Industry.

“I felt overwhelmed and surprised at the same time.  I never thought it would happen,” Balane responds when asked about the growing attention his chocolate artworks are receiving.

His current work as chocolatier is also a sharp contrast from the 2-year airport maintenance course that he finished at the PATTS College of Aeronautics, that resulted from the advice of a relative who said that it would be the best way to get himself a job.  Ignoring his inclinations toward the fine arts, he pursued this more practical course.

His first contractual job was with Mapecon as pest control technician that led him to work with his client, the Manila Hotel.  After five months, he managed to get hired as a waiter at the hotel and eventually got assigned in the cold kitchen to do some ice carving.  He had no real interest in doing the work but when the original artist left, he was given a week to learn it.

His initial experience joining competitions started in the 1992 Chefs on Parade where he didn’t win a prize.  Balane felt that he rushed his work and should have taken his time and consumed the whole hour allotted.  Nevertheless, it was during this encounter that he started getting interested in food sculpture after looking at his competitor’s work and thinking intuitively that he could do a better job given more preparation. 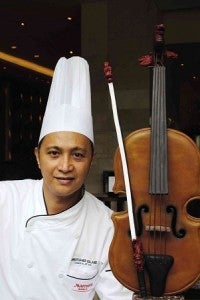 True enough, he won bronze for Hyatt Hotel in the 1993 ice carving category.  By 1995, he won three medals for Manila Hotel:  gold in team ice carving, silver in butter sculpture, and bronze in individual ice carving.

According to Balane, his prize for winning in the competition led to a 1.5 year Advanced Culinary Arts training program in Virginia, United States through the Association for International Practical Training (AIPT).  After the exchange program, participants were expected to return to their home countries and stay for at least two years.

During his stay abroad, Balane managed to carve in chocolate the faces of five former US Presidents: Clinton, Ford, Carter, Reagan, and Bush Sr.  It was at this time that he started to sculpt with chocolate.

When asked about the differences between using ice or chocolate as a medium, he replies, “In ice, it never lasts.  I would prefer chocolate because you can see it for a long time.”  He further explains that he usually looks at two to three photos when working on a person’s face sculpture.

He reiterates that sculpting requires much patience and time.  “The more time you have, the clearer the detail,” he says.

Sometimes, it also happens that others may not see the semblance between the real person and the sculpture.  Balane answers, “I feel bad but I don’t show it.  Then I look for the problem.  You really need time.  You need patience.”

Over the next 10 years of his career, Balane embarked on a traveling career by working for different cruise ships.  He didn’t mind moving around because it broadened his world.

It was also during this time that his mother got sick with colon cancer (lasted for around eight years) and he devoted his energies to helping out with her needs.  He also started looking for a Philippine-based job during his days off from the ship.  When he finally got accepted at Marriott Hotel, he rushed to her bedside to tell her the good news only to discover that she already passed away.  According to Balane, it was painful she couldn’t share the joy and at the same time, the new job felt like a gift from her.

Nowadays, Balane keeps himself busy with more chocolate art pieces.  For a one kilo Belgian chocolate block, he can create custom-made “mini-me” face sculptures for around P2,500 to P5,000, depending on the detail required.  He is also gearing up for the Christmas season.

He advises interested chocolate artists to not only have passion but more importantly, determination.  He also tells others to listen to their instincts.

“I thought my career would end when I was assigned to the cafeteria,” he recalls.  In the end, it opened many windows.