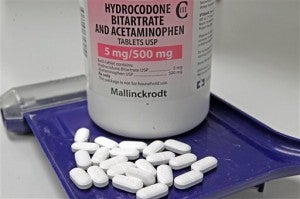 In this Feb. 19, 2013 file photo, hydrocodone bitartrate and acetaminophen pills, also known as Vicodin, are arranged for a photo at a pharmacy in Montpelier, Vt. The Food and Drug Administration on Thursday, Oct. 24, 2013 recommended new restrictions on prescription medicines containing hydrocodone, the highly addictive painkiller that has grown into the most widely prescribed drug in the U.S. AP

WASHINGTON  — The U.S. Food and Drug Administration has approved a stronger, single-ingredient version of the painkiller hydrocodone, the widely-abused prescription medicine for chronic pain.

The agency said Friday it approved the pill Zohydro for patients with pain that requires “daily, around-the-clock, long-term treatment” that cannot be addressed with other drugs.

Hydrocodone is currently sold in combination pills like Vicodin to treat pain from injuries, surgery, arthritis, migraines and other ailments. The new drug from Zogenix is the first pure, non-combination form of the drug approved in the U.S.

The approval came as a surprise since the agency’s own panel of outside advisers gave the drug an overwhelmingly negative review last year. The agency’s panel of pain specialists voted 11-2, with one abstention, against approving the drug last December, questioning the need for a new form of one of most widely-abused prescription painkillers in U.S.

Zohydro’s approval was quickly criticized by patient safety advocates who had urged the FDA to reject the drug at a public meeting last year.

“We’re just going to kill more kids and then the FDA is going to come back and say, ‘oh, we made a mistake,'” said Avi Israel. Israel’s son Michael committed suicide in 2011 while struggling with painkiller addiction. Israel is the founder of a group called, Save the Michaels of the World, which aims to combat painkiller abuse in young people.

In 2011, U.S. doctors wrote more than 131 million prescriptions for hydrocodone, making it the most prescribed drug in the country, according to government figures. Hydrocodone pills also consistently rank among most-abused medicines in the U.S., according to the DEA.

The drug belongs to a family of medicines known as opiates or opioids because they are chemically similar to opium. They include morphine, heroin, oxycodone, codeine and methadone.

Friday’s news was also blasted by lawmakers in Congress who have been trying to rein in prescription drug abuse in their home states.

Rep. Bill Keating, a Democrat, said the FDA should have required the drug to contain anti-abuse design features that would make it harder for users to crush the pills and snort or inject them.

“FDA not only approves this dangerous drug, but does so without requiring any abuse-deterrent features. This is outrageous,” Keating said in a statement. “Abuse-deterrent technologies should not be the anomaly, they must be the norm.”

The timing of the FDA announcement also drew criticism from safety advocates and lawmakers. Only one day earlier the FDA said it would support stronger restrictions on combination drugs containing hydrocodone, including Vicodin and dozens of other generic formulations.

The drugs currently available mix hydrocodone with non-addictive pain relievers like aspirin and acetaminophen. For decades these drugs have been subject to less rigorous prescribing limits than other prescription painkillers like oxycodone.

Late Thursday, the FDA said it would recommend moving hydrocodone drugs from the schedule III class to the schedule II class of medications, a move that will limit the number of refills patients can receive and how many health professionals can prescribe the drugs.

The Drug Enforcement Administration had first asked the agency to take that step a decade ago, and lawmakers and safety advocates had increased their pressure on the agency in recent years.