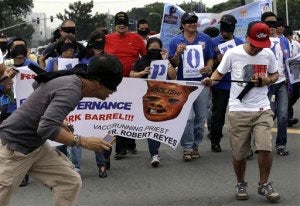 MANILA, Philippines–Expressing collective disgust over unabated smuggling, unfavourable policies, and plunder of government funds in the name of farmers, local agricultural producers and allied industries on Wednesday formed an alliance to fight for survival and the rights of farm workers.

In an agri summit at the Kalayaan Hall of Club Filipino in Greenhills, San Juan, members of the Samahang Industriya ng Agrikultura (SINAG) called on government to set the right policy directions and work with the private sector to ensure food security; sustainable local production; safe food and properly labeled agricultural produce; improved productivity and incomes; and rural livelihood.

Composed of more than 30 groups of rice, corn and vegetable farmers and traders, pork, livestock and poultry producers, aquaventure groups and fertilizer and pesticide suppliers from Luzon, Visayas and Mindanao, SINAG members also called for the immediate prosecution of those involved in the systematic plunder of the nation’s coffers.

Representing millions of workers in the farming and allied sectors, SINAG said the underdevelopment of the local agricultural sector has long been used as a convenient pretext to misappropriate and steal government funds.

“Billions of pesos that could have been used to increase farm productivity, build new irrigation systems, farm-to-market-roads, post-harvest equipment and facilities like slaughter houses and cold storage warehouses, marketing infrastructure, retraining and extension services and other forms of public sector assistance, were instead pocketed by politicians of all shades and color in cahoots with erring public officials,” the group said.

In a collective declaration, SINAG said it will advocate the following:

·      Focus agriculture strategy of local food production to ensure that
more food is grown where it is needed;

·      Stricter food safety and inspection services on imported food and agriculture produce to ensure that these are safe, wholesome, correctly labeled and packaged; Import only when necessary;

·      Call for the immediate prosecution of all persons involved in the Malampaya Fund, Fertilizer Fund and ACEF fund scams

·      Work with the national government towards a clear policy on agriculture and its role in attaining food security and equitable economic growth; and

·       Continue to observe and scrutinize the actions of various government agencies in order to ensure that such actions are not inimical to the interests of the country and people.