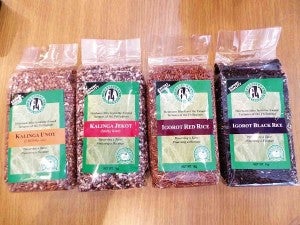 “I am an activist,” she proudly says.

Vicky Carlos Garcia is a slow food activist and the prime promoter of heirloom rice from the Cordillera region. She met a Peace Corps volunteer Mary Hensley while both were in school in 2001, and Mary  made a thesis on the Future of Heirloom rice and how to preserve it through promotions and marketing.

They adopted the Ghana Model of Equity Partnership, and Mary soon graduated from the Amos Tuck School of Business with the project under her belt.

They started working with just seven, yes seven farmer-friends in 2005. They studied the different heirloom varieties from Ifugao, Mountain Province and Kalinga and checked the small volumes the indigenous people produced. Now, how do you market small amounts to the global market?

Soon, as they packaged and sold the heirloom varieties and also actively promoted the preservation of such rare breeds, their membership of the now  Rice Terraces Farmers Cooperative rose to as many as 2,000 members, with about 370 actively involved in heirloom rice farming. 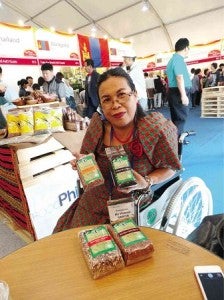 Today, they are Department of Agriculture’s proud baby, with an export of about 15 metric tons of Heirloom rice to the US.  Vicky knows she is not very popular among the many NGO advocates who also wish to help Cordillera farmers, but she pushes on.  “Many of the NGOs do not like me, because we push the farmers to action with realistic farmgate prices. We are strict about quality and we “incubate” our rice for 15 days so that bugs and other pests cannot thrive in them. We do not mix varieties even if volumes are few,” she continues.

And this is the real test of  a thriving social enterprise. There are no shortcuts. Varieties must be kept separate. Just like in coffee. You get better value for “pure” shipments as opposed to mixed bags or assorted varieties in one bag.  With Vicky, she makes sure that each heirloom variety, say Jekot is not mixed with Unoy or Tinawon. There are long grain species and short grain ones. The long grains, upon harvest for example, must not be mixed with other varieties or the price will go down instead of up.

Cooking time for heirloom rice is also critical. Slow food takes time. You have to soak the rice before cooking to get the best results and to also remove the phytic acid (according to Dr. Albert Jo, a healthcare practitioner). Well, no one told us that before. This is why people have this notion that heirloom rice is “tough,” matigas (hard) and not pleasurable to eat. That is wrong. All you need to do is experiment with the correct “soaking” time for each batch. Yes, it is not fast food. But slow food tastes a lot better. 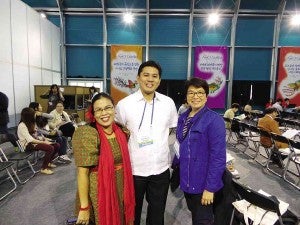 Now, what are the social benefits of eating heirloom rice? As Slow Food believes, heirloom varieties must be preserved because they also embrace culture and the community. If we lost all our heirloom seeds, we are a people with no history, no culture. These are the varieties handed down from generation to generation by our forefathers. And the rice terraces farmers will continue to produce these if we continue to buy them. What has happened in the past is that unscrupulous traders gave the communities NFA rice in exchange for their heirloom harvests. These traders deprived the communities of their own food, all for a measly financial profit.

What Vicky’s cooperative does is to  make sure and provide for food of the producer first as he or she pledges an amount that he or she can sell to the Coop, beyond their household consumption. So, the farmer gets to eat and enjoy his harvest while having a small excess to sell to the cooperative.

I had the pleasure of meeting  Kalinga and Ifugao farmers when we were in Slow Food Turin last year. They have never traveled outside the country before this trip and it was such an eye opener for them to see small producers from other countries also displaying their rice, coffee and what-have-you to other Slow Food members. It makes them realize that “to preserve ones heritage and culture” is respected and hailed all over the world.

So, how do we help Vicky and her 370 farmers? By eating heirloom rice and appreciating what it preserves. Not just economically but culturally. By promoting heirloom rice to the rest of the world. By making a change in the way we view rice—not as just another commodity.

Vicky, wheelchair-bound, and sometimes ambling about with a limp, carries on. She is at every Slow Food event from Turin to Korea, promoting the carefully-chosen and “sorted by variety” heirloom rice which is marketed under the RICE Inc. brands.

We salute her kind. Why should an NGO continue to do this? She is slowly transforming herself into a social enterprise so that her efforts and that of Mary Hensley will become sustainable. But for us consumers, what we need to do is understand the social benefits of buying an heirloom product. It is not just for the farmer’s sustenance. It is actually for ourselves. For our cultural preservation.

The author is founder and owner of ECHOStore sustainable lifestyle, ECHOmarket sustainable farms and ECHOcafe in Serendra, Podium and Centris QC malls. She also is president of the Women’s Business Council of the Philippines and President of the Philippine Coffee Board Inc. She often speaks to corporates, youth and NGOs on social entrepreneurship, women empowerment, and coffee. You can follow her on twitter.com/chitjuan or find her on facebook:Pacita “Chit” Juan. E-mail her at [email protected]