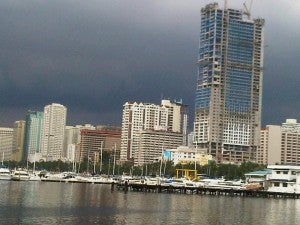 Manila’s changing skyline taken on Aug. 10, 2013. The Philippines stands out in the region as the only country still expected to grow at a healthy pace this year and the next despite weak global economic conditions. PHOTO BY RICK ALBERTO

The Philippines stands out in the region as the only country still expected to grow at a healthy pace this year and the next despite weak global economic conditions.

Local policymakers, however, still need to solve the puzzle of how to translate this economic growth into more jobs for Filipinos to reduce poverty across the country, the Asian Development Bank (ADB) said.

“The challenge is how to establish the link between strong economic growth and poverty reduction,” ADB senior economist for the Philippines Norio Usui said at a press conference Wednesday.

In its Asian Development Outlook (ADO) update report, which was released this week, the ADB announced revisions for its growth forecasts for countries in the Asia-Pacific region. The forecast for the Philippines’ economic growth—now at 7 percent from the previous 6 percent—was the only one revised upwards by the multilateral lender.

The projected growth for the rest of Southeast Asia was revised to 4.7 percent from the previous 5.7 percent for this year.

“Southeast Asia is crimped by weakness in its three biggest economies. Lackluster export markets and moderated investment have weighed on growth in Indonesia, Thailand and Malaysia,” the ADB said in a statement.

The ADB took note of the Philippine economy’s first-half growth of 7.6 percent, which was the fastest in Southeast Asia.

Commenting on the report, Usui attributed the Philippines’ progress to massive reforms implemented by the Aquino administration over the last three years, namely the reduction in the country’s deficit, higher spending on infrastructure and efforts to curb corruption.

On top of these reforms, Usui said the economy also continues to enjoy the benefits of steady remittances from migrant workers, which fuel domestic consumption that makes up 70 percent of domestic output.

The government’s focus in the remaining years of President Aquino’s term, Usui said, would be ensuring that the rest of the population benefits from the fruits of the country’s economic growth.