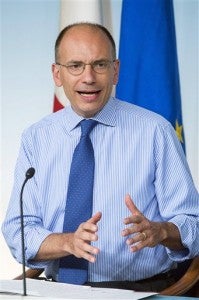 NEWARK, New Jersey — Italy is closing its consulate in New Jersey, the home state of Frank Sinatra and Frankie Valli.

The Newark consulate is a casualty of economic troubles 4,200 miles (6758.93 kilometers) away — an Italian economy in recession, a government that needs money and the Euro Zone crisis. The closure leaves a state whose Italian roots run deep in the American consciousness without an official tie to Italy.

The office tucked in a downtown high-rise is slated to close in March. A smaller vice consulate offering limited services will remain open in Trenton.

About 1.49 million New Jersey residents — about 17 percent of the state’s population — have Italian ancestry, according to the 2010 Census.

“We Italians never take anything sitting down,” said U.S. Rep. Bill Pascrell, an Italian-American from Paterson, New Jersey, who is lobbying Italian Ambassador Claudio Bisogniero to keep the consulate open.

Pascrell, who also plans to meet with members of the Italian Parliament, said the office works with 17,000 people each year process visas, passports and other documents. It also helps visitors learn about Italian culture.

“It’s very difficult to think about it closing down,” said Pascrell, who plans to urge consideration of alternatives to closure, such as limiting services. “Where will all of our folks go?”

The answer, for most here in North Jersey, is New York City. The consulate in Philadelphia will serve residents of South Jersey.

Some think the consulate’s proximity to New York City made it an easy target.

“You want to close Newark because it’s close to New York,” said Augusto Sorriso, a member of the General Council of Italians Living Abroad, an elected group that advises the Italian government. “Could you imagine the American administration closing LaGuardia Airport because it’s 2 minutes from Kennedy Airport?”

Sorriso, a Red Bank, New Jersey, resident and former mayor of a town in Sicily, said the group is planning protests at the consulate and the Italian Embassy in Washington.

The consulate forwarded questions to the embassy, which did not immediately respond.

The consulate’s lobby could pass for the waiting room at a doctor’s office, save the photos of the Italian landscape and European Union flag.

Cristina Maffei came with her 20-year-old daughter; both recently received dual citizenship. Maffei is incensed over the closure and wonders how elderly New Jersey residents will make it into New York for appointments.