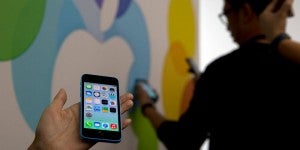 TOKYO – Apple acolytes in Asia kicked off the global rollout of two new iPhones Friday, but complaints about its high price and no new alliance in the vast Chinese market threatened to dampen the mood.

The once-unbeatable king of the smartphones was brandishing a potentially lucrative new deal with Japan’s biggest mobile carrier, but was without any new partnership in China.

That, and rumblings over the high cost – even of the pared-down iPhone 5C – looked set to mute the fanfare that routinely accompanies launches, observers say.

The double debut kicked off in Australia when stores threw open their doors to crowds at 8:00 am (2200 GMT Thursday).

Jimmy Gunawan, 33, was first in line at the company’s flagship Sydney store, but was surprised he only had to stake his place 20 hours earlier.

“Last year, I got here around the same time and there was already a queue of about 20 people,” the freelance graphic designer said.

In Tokyo, diehard fans began lining up last week and even sat out a weekend typhoon to keep their spot in a queue that grew to around a kilometre (half-a-mile) in length by opening time, police estimated.

Media helicopters hovered over the Japanese capital, where Batman was among those outside the Apple store in Ginza.

Actor Ken Watanabe, star of “Inception” and “Letters From Iwo Jima”, was on hand to welcome buyers at Docomo’s main Tokyo shop, marking the new alliance between Apple and the country’s biggest carrier.

The firm, which has about 42 percent of the Japanese market, has shed more than 3.5 million subscribers to rivals since 2008, when SoftBank first rolled out the iPhone in Japan, local media have reported.

Hisako Nagashima, a 34-year-old manicurist who was waiting to snap up an iPhone 5S in gold, said it had been make-or-break time for her relationship with the company.

“If NTT Docomo had not released iPhone this time, I would have changed carriers,” she told AFP.

All three Japanese carriers were offering both models “free” with two-year contracts.

But in places where up-front payments are more common, there was griping over the steep asking price.

“Wow, $1,129 (US$1,065) for an iPhone 5S here in Australia. That’s simply insane,” tweeted Bill Hutchison, referring to the cost of a 64GB model of the new version, which boasts a speedier processor and a fingerprint sensor.

The polycarbonate-bodied 5C, supposedly aimed at budget-conscious smartphone shoppers, was widely trailed as Apple’s answer to the onslaught of cheaper, Android-powered models, led by Samsung.

But its hefty $700 ticket price in China will put it out of reach of most consumers in the world’s biggest mobile market.

“It’s not worth the price,” said Wang Ying, a Beijing-based analyst with consultant firm iResearch. Many domestically made smartphones are priced as low as $100.

Apple has not revealed what the “C” stands for, but did not knock down months of media speculation that it was intended to signify “cheap” or “China”.

In an interview with Bloomberg Businessweek, published Thursday, Apple chief executive Tim Cook countered that quality had always been the driving force.

“We never had an objective to sell a low-cost phone,” Cook told the magazine. “Our primary objective is to sell a great phone and provide a great experience, and we figured out a way to do it at a lower cost.”

Analyst Wang said Apple also appeared to have missed a trick by not reaching a deal with China Mobile and its 700 million subscribers — the country’s largest carrier.

“Cooperating with China Mobile will be a significant channel for Apple to… win more users.”

Despite their simultaneous availability in China — the first time Apple has brought the country online in the initial wave — Hong Kong’s resellers were pouncing, hoping to flip the phones for as much as double what they paid.

“Handsome boy, are you selling your phones?” a reseller was heard discreetly saying, before leading new iPhone 5S owners to the back stairs of the shopping mall to carry out the transaction.

The much-coveted gold-coloured iPhone, which resellers thought would attract a real premium in status-conscious Hong Kong, was nowhere to be found.

“I haven’t seen a gold one yet,” a reseller, who declined to give his name, told AFP an hour into the launch.