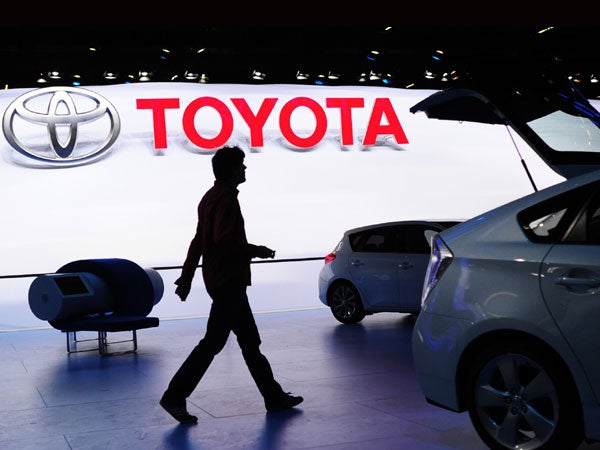 A man walks at the Toyota booth during preparations for the International Motor Show IAA in Frankfurt Germany, Sunday Sept. 8, 2013. Toyota has reissued a recall of 870,000 vehicles in the United States and Canada after discovering initial repairs were not performed properly, the Japanese automaker said Monday. AP

CHICAGO—Toyota has reissued a recall of 870,000 vehicles in the United States and Canada after discovering initial repairs were not performed properly, the Japanese automaker said Monday.

“We got reports there was a problem with vehicles that had supposedly been fixed in the initial recall,” spokeswoman Cindy Knight told AFP.

“It turns out dealerships weren’t performing the repairs correctly.”

Toyota has issued new instructions to dealers and will be notifying customers that they need to bring their vehicles back in to be checked.

In a notice to safety regulators, Toyota said it found that the rear tie rod could develop “unwanted movement and rust” if the nuts are improperly tightened during service.

This could eventually lead to thread damage and eventual failure of the tie rod, which would cause an abrupt change in the vehicle’s alignment.

The recall affects RAV4 vehicles with model years 2006 through 2010 and Lexus HS250h vehicles built from October 2005 through September 2010.

It was the second time in a week that Toyota issued a second recall for the same group of vehicles.

Some 133,000 Highyland and Lexus RX vehicles were recalled in the United States Tuesday to repair a problem with the hybrid engine’s inverter system.

The vehicles were recalled in 2011 after initial reports of problems with solder. Further investigation discovered a problem with the circuitry.

Toyota has worked hard to rebuild its once-stellar reputation for safety after a series of mass recalls sparked US congressional hearings in 2010.