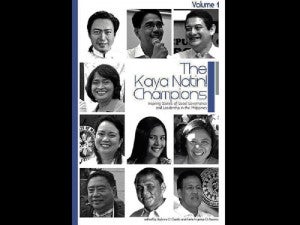 It’s the one book that ought to have many more volumes to follow it up.

For a country where tales of corruption abound, a movement for clean governance has put together stories of what remains “the exception” in the nation’s political scene: good news in governance.

“We’d like corporate foundations to sponsor the book so we could bring them to public schools. They could buy the book then donate them to schools,” he says.

Titled “The Kaya Natin! Champions,” the book hopes to spread the good governance ministry around the country and inspire others to take on the advocacy.

The publication also aims to gather more funds to sustain the Kaya Natin! caravan, which brings its champions to schools around the country for talks with students and young leaders.

“We feel like by putting it in a book, we can reach out to more. It’s sad that when you talk about government, people would say it’s corrupt, it’s about people working for their own keep. But in this book, we want to show people that there are really genuine public servants,” says Keh.

The book debuts amid a critical phase in Philippine politics. Standing on an anticorruption platform, President Aquino is now leading a crusade to bring to justice sinners from the past administration, including the alleged principal, former president Gloria M. Arroyo.

“If we don’t bring these stories to life, this (good governance) will remain to be the exception instead of the rule. We want to come to a point when the good, the proper, the rightful become the ordinary instead of the exceptional,” Robredo tells the Inquirer.

Now experiencing first hand the challenge of overcoming a “systemic” problem, Guingona calls the movement “a sanctuary” for reform politicians.

“The biggest challenge is not to turn. Sometimes, because the forces that are asking you to turn back are still there and very, very strong, it can get frustrating. And you need a source of inspiration, a group of peers of common believers, who can motivate and inspire you and tell you that you can do it,” says Guingona.

Giving a face to good governance, as Senator Francis Pangilinan puts it, is key in helping the public understand what is otherwise “an abstract term.” And with organizations like Kaya Natin! filling such need, the goal of bringing governance into the mainstream has become more attainable.

“You now have a new generation of public leaders who are vision-driven, results-oriented. And the key is to get them organized, to build a critical mass so that what is now a sub-culture of good governance—and you still have the dominant culture of mis-governance—will eventually become the rule rather than the exception,” Pangilinan tells the Inquirer.

Padaca is already looking forward to future volumes of the Kaya Natin! book, even teasing her friends in the movement about interesting follow-ups.

“Let’s wait for the next chapter. Take note, this first book does not even include love teams that developed in the three years of Kaya Natin!,” jokes Padaca in her remarks at the launch, prompting laughter among her audience.