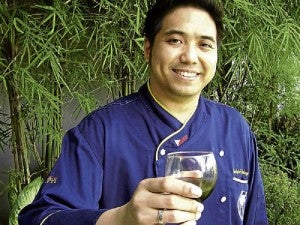 Although he loved to cook, Rudolph Cabuay didn’t follow his instincts when he chose his college course in business administration.

His father, now a retired Army General, suggested an HRM (Hotel and Restaurant Management) degree that Rudolph didn’t follow either. “I didn’t see this as a career before.” Rudolph explains. He was actually waiting for his Dad to ask him to enter the military—but his father never broached the idea.

Since his grandmother once said that one was enough in the family, he left it at that.

For his first job, Rudolph became a flight steward for Philippine Air Lines. Although he enjoyed travel, he eventually yearned for something more. He tried a family business in Pangasinan for a few years.

Then he decided to enroll in a 1-year culinary course (Diploma in Culinary Arts) at the International School for Culinary Arts and Hotel Management (ISCAHM).

It was a turning point.

Rudolph realized that being with industry professionals helped him gain knowledge and that culinary arts could be a good career.

He absorbed much from his mentor and eventually work boss, Chef Norbert Gandler. “He is actually strict but he is like a father figure to me.” He relates how he himself asked Chef Gandler to hire him after school.

Since many of his classmates were getting hired abroad, some people were wondering why he was not pursuing his applications in other countries. He told Gandler, “I actually want to work in Burj Al Arab (7-star hotel). But while waiting for that one, I still want to learn from you.” 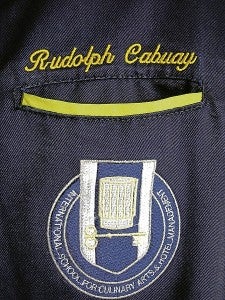 Rudolph became faculty assistant to Chef Gandler and eventually opened the school restaurant Aubergine as “saucier” (head of the station handling sauces). Kitchen work was highly stressful. He took a vacation abroad and upon returning to the Philippines, eventually became one of the younger faculty members of the school.

He was also able to attend the US Meat Export Federation Culinary Program in Singapore that has given him some specialty on the meat topic.

When he first entered Iscahm, Rudolph was considered senior (24 to 25 yrs old) compared to his younger classmates who pursued culinary education right after high school. He stressed the importance of maturity and that it may be a good idea to pursue a general college course first before pursuing the specialized field.

“Skill can be taught. What you really have to have is drive and passion.”

Rudolph sometimes wonders if he should have at least tried working abroad, since that is a typical direction for culinary graduates. He likewise advises fresh graduates to pursue career opportunities while young.

“If you have the chance to leave the country, go for it especially if you’re single.” He cites that the demands of a kitchen career may not be highly compatible with family life and there are some who choose to move out of the industry in order to find balance.

At 32 years old, Rudolph just started work as a hotel executive handling food and beverage. He finally sees an HRM career for himself, just as his father had surmised. “I don’t think it will end here,” he quips. But when asked whether he thinks he made the right career choices, Rudolph nods, “Yeah, I’m happy.”