Leather craftsmanship that is distinctly Filipino 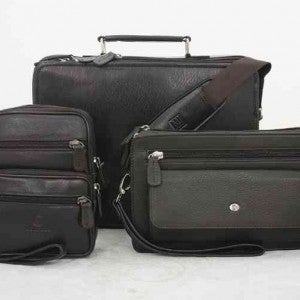 MCJIM is an expert when it comes to accessories for men.

If Jim Cham had his way, he would be singing all the way to the bank.

That’s because music has always been his passion. He spent a good part of his youth singing in combos, as they were known then. He gladly sang for a pittance just to be able to share his love for music with his audience.

But family life, which started when he got married at age 19, nipped his singing career in the bud.

Realizing he had to find a more stable source of livelihood to feed, clothe and shelter his young family, he set aside his guitar, turned his back on the stage and pursued another passion: leather goods.

That put Cham on the long road to build McJim Leather Goods to what it is today, one of the biggest local manufacturers of men’s leather accessories that are giving foreign brands a run for their money.

McJim specializes in men’s accessories, with belts and wallets accounting for the bulk of its sales. Founded in the backyard of the family home in 1968 with just three employees—Jim, his wife and a helper from Baguio City where the couple met during his guitar playing days—the company today has over 300 employees.

McJim marketing manager Bernadett Chang says that McJim has been able to grow significantly over the past 45 years because of its unstinting adherence to top quality standards.

Quality, the company says, is the first ingredient of a good product and a philosophy that guides its processes—from selecting materials to product design, the manufacturing methods to selecting the most qualified leather craftsmen to make the products by hand.

This means investing in fine leather from Spain and Italy, sewing machines from Germany, and high level of craftsmanship from the Philippines. While certain phases of the manufacturing process involve machines, it still takes expert human hands to fashion a leather product into something that approaches art.

Based on the company’s experience, machines are an inferior substitute to the work achieved by expert craftsmen.

Jim, whose family used to distribute popular watches such as Rado and Longines, learned all about the leather industry through experience—trial and error being a hash taskmaster.

Initially, he ventured into belts. In the early 1970s, he did not put any brand but merely supplied to the department stores and other retailers who put their own brands on his products.

But even if he did not have any name, he was already big on quality, and McJim was one of the first local manufacturers of leather accessories to go abroad to hunt for the best materials for its target market.

It went to Japan, for instance, to buy leather as well as buckles for the belts.

Among the first department stores to carry the leather goods was the former Otis Department store, which was partly owned by Jim’s sister.

Jim’s wife, a Miss Baguio pageant winner, was instrumental in finding buyers for the fledgling company’s products due to her amiable nature. She could talk to anyone and everyone, and would easily convert cold calls to potential clients into sales, not just in Otis, but in other department stores such as the former Good Earth Emporium.

After a few years of selling unbranded goods, Jim felt it was time to put his own brand on the products. He dared to brand the leather using his own name, an indication of how much he

believed in his products.

He was also able to penetrate new distribution channels, such as the SM group. The Gaisano and Robinsons malls likewise carried McJim leather goods, which expanded in range from belts and wallets to bags and other men’s accessories.

“As the malls grew, the company did, too,” says Chang, adding that McJim’s wide range of leather products are now found in all department stores, under the men’s accessories department where it has its own section.

The 66 year old frequently goes abroad to update himself on the latest trends and technology. For McJim, there is simply no compromising on quality even if it means pricing the goods above those of its competitors and exerting extra effort to impart on the employees the need to maintain product standards.

Today, McJim’s sales mainly come from the original belts, which account for 40 percent of annual sales, followed by wallets, with up to 35 percent. Bags and small leather goods, such as the occasional suspenders, make up the rest.

Chang says that McJim tried to produce a ladies line. But the company discontinued the line when the founders realized that ladies fashion required a different skills set. Thus it stuck to men’s accessories, which it knew by heart.

Chang explains that, unlike women’s accessories, those of men tend to be more stable and did not require frequent changes. Its market—professionals who have left their trendy days behind, according to the company—wants to be both fashionable and conservative, steering clear of anything flashy.

After 45 years in the market, its challenge today is to keep up with the times and penetrate the broader market to endear McJim to a new generation of loyal customers. This means possibly coming up with a separate brand that will feature products using other materials such as local leather and polyester.

But the core, however, will still be McJim Classic and all products will conform with the McJim philosophy of style, quality and elegance expressed in products of high quality but within reach of most Filipinos.

“We want everyone to enjoy great products with a great brand that is proudly Filipino,” says Chang.