Former banker turns into an artisan 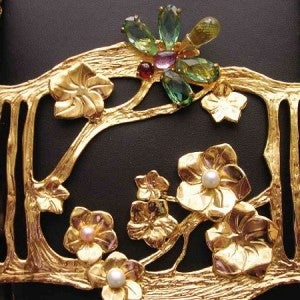 ONE of Georgina’s accessories made of sterling silver then plated in gold. Photo by Ma. Esther Salcedo-Posadas, Contributor

They recently incorporated as Alchemista, Inc. The company works with natural materials such as semi-precious stones, sterling silver, brass, and bronze.  Their goods have been on display at Firma and Rajo Laurel shops.  They have joined Manila trade fairs and have managed to obtain a few orders from foreign clients.

Georgina admits to feeling uncomfortable labeling her accessories as jewelry.  “For me, I don’t see myself as a fine jeweler.  I’m more of an artisanal crafts person.”

Frederick, on the other hand, is not too concerned.  “We make items that are for adornment.”  He continues, “We make things that adorn the body, the house, or the home.  We like to make beautiful things that adorn.”

The couple explains that they try to develop a functional kind of adornment, like creating multifunctional pieces.  “We’re an affordable indulgence,” Georgina adds.

Georgina relates that she came across the jewelry business by accident.  While taking postgraduate studies in Australia around 2003, she attended silversmithing classes under an Australian jeweler.

By 2005, she started to carve and work with metal as a hobby and as a means to de-stress.  This involved a process known as “wax carving” where the metal  gets its shape.  Then she would wear her creations and people would ask about it.

Thus around 2007, they decided to join the Karl Edwards bazaar to establish whether there is a market for the accessories.  They initially developed brass products that were cheaper than silver and gold.  However, they discovered soon enough that there was a resistance to brass as fashion accessory.  It was often associated with materials for making a bed.  They have since worked with sterling silver and gold plating. 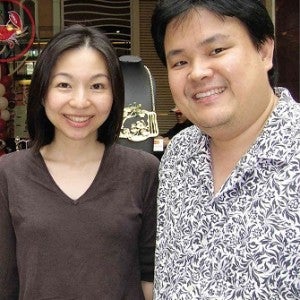 ALTHOUGH still a start-up, Frederick and Georgina Ong have the support of their parents who believe in the value of entrepreneurship. Photo by Ma. Esther Salcedo-Posadas, Contributor

However, they claimed to have broken even that day.  It was enough motivation for them to continue with the business, as Frederick concluded that “there is a market, not a big market, but a select market worth pursuing.”  They have been joining numerous bazaars since.

The company also specializes in custom made pieces that take three weeks to a month to complete.  Starting with the design or concept, Georgina proceeds to do a few sketches and show stones.  Usually, two options are given.  Then a quotation (rough range of P5,000 to P10,000 but it really depends on the design) is provided to the client.  Once an agreement is reached, Georgina proceeds to carve wax and do metal casting.  After stones are set, she proceeds to finishing and plating.

Georgina is assisted by a former goldsmith, now also a silversmith.  She gives him continuous projects in order to keep him employed.  The couple explain that when gold reached skyrocketing prices, many goldsmiths lost jobs and had to find alternate means of occupation.

Georgina guarantees, “We won’t copy another person’s design.  But we can create something inspired by it.  Our philosophy is to always give value for money to clients.  Always be authentic and have integrity.  We disclose materials used.  We don’t cut corners.”

While Georgina takes care of the design aspect, Frederick manages everything else.  He attests to have improved the business every year although they only started selling full time in the middle of 2012.  The couple also admits that there have been times they didn’t know if they could make it.  Nevertheless, they have decided to pursue the business for as long as it keeps growing.

Alchemista, Inc. has yet to establish it own storefront.  In the meantime, the couple entertains inquiries for custom-made accessories via cellphone.  Frederick, who is in charge of sales and marketing, may be contacted at 09178983733.

The company also continues to develop its own designs that they sell via bazaars.  When asked about her favorite pieces, Georgina replies, “It’s like having kids.  You love all your kids.”