V is for vibe, victory and Vios 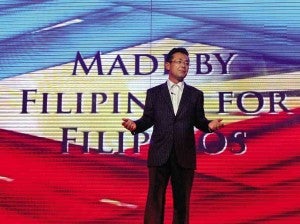 Sugata: ‘The Vios is made by Filipinos for Filipinos.’ PHOTO: EUGENE ARANETA

Toyota threw a string of parties last week that would put any party-loving person in their “happy place”: the launch of the all-new Vios. Aside from their “value for money” persona, the manufacturing giant decided it wouldn’t hurt to be “fun” too.

Coming from the game-changing launch of the 86, Toyota unveiled the all-new Vios, inspired by the spirit of “Waku-Doki” or fun to drive. You would notice the edgier exterior (read: younger look) plus a roomier interior, resulting in a more comfortable vehicle. The Vios maintains the same reliable VVT-i system, four-cylinder inline DOHC 16-valve engine with electric fuel injection (EFI). “With its new, dynamic and aggressive design, the Vios offers an emotional connection between car and driver. In doing this, the everyday driving experience is something everyone can look forward to… something fun,” said Ariel Arias, senior vice president of Toyota Motor Philippines Corp.’s marketing division. 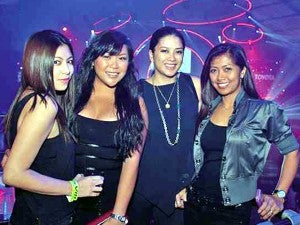 The author (third from left) with the Chicdriven and Makeup Test Crew: Brenda Tuason, Pia Casequin and Sheila Johnson of Trapik.com

For the media launch, the guests were treated to two of the most iconic rock stars in the country, Rico Blanco and Ely Buendia. The media guys couldn’t help but get rock struck when Buendia started singing Eraserheads hits with a strings-and-winds accompaniment. In his speech, TMPC president Mitch Sugata explained that because the Vios is one of the most successful nameplates in the country, they anticipated the increase in demand for the new car with a P2-billion technological infusion, which will result in an additional 10-percent production capability from July to December 2013. They project to manufacture about 15,000 units of the Vios just for this period. 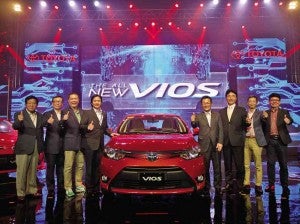 For their public launch, Vios brought in a unique ensemble of local and foreign DJs for the Vios Vibe. Headlining was DJ Amely from  Ukraine, who is 2012’s  World Sexiest Model DJ first runner-up. Front acts were Deuce Manila and the DJ-and-drum tandem of MotherBass. Local party-scene heroes Ace Ramos and Mars Miranda continued the fun beats until the wee hours.  Seen fist-pumping at the party hosted by Sarah Meier were the likes of Isabelle Daza, “Boys’ Night Out” DJs Toni Tony, Slick Rick and Sam YG, popular director Raffy Francisco. The star of the night, the all-new Vios was unveiled to the party crowd with its Sid Maderazo-directed TVC in the background.

Toyota claims that the fun is just starting. With this change of image, not only are  we  looking forward to fun and exciting products in the future, but also OMG-worthy events.

For comments and suggestions, please e-mail me at [email protected]; like us on Facebook/chicdriven or follow us at twitter @chicdriven. Check out our blog www.chicdriven.com/wordpress for behind the scenes and other topics.