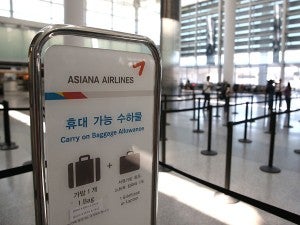 SEOUL – Shares in South Korea’s Asiana Airlines shed 6.4 percent on Monday after one of its passenger jets crashed at San Francisco airport over the weekend, killing two people and leaving 182 injured.

Investigators are looking into the cause of Saturday’s crash that killed two Chinese nationals, including a possible pilot error.

On Sunday,  the Seoul-based carrier’s CEO, Yoon Young-Doo, said “currently we understand that there are no engine or mechanical problems” with the plane, which was bought in 2006.

“The limited market impact will likely taper off in one or two days,” he said.