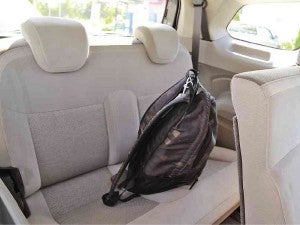 CHEVROLET’S Spin MPV seats seven and is the widest and longest in class.

BANGKOK, Thailand—The ideal vehicle for most Filipino families is a seven-seater that is equally adept at ferrying passengers or bulky cargo. Chevrolet will soon launch a vehicle that fits the bill, the Spin MPV, which the company previewed during a driving event in Thailand.

The Spin is built on a B-segment (subcompact) passenger car platform, with a two-box body that encloses a surprisingly roomy space. That space can be converted from carrying seven passengers in three rows of seats to transporting long or tall objects. With three rows of seats in place, the Spin accommodates three passengers in its second row and two in the third row, with a small upright cargo space of 162 liters still available behind the third row. Fold the third row and cargo space expands to 864 liters, much larger than any sedan’s trunk. With all seats folded, the volume is a sizeable 1608 liters, enough to transport bulky items such as TVs and furniture. Wheelbase is 2620 millimeters, longer than some C-segment passenger cars’. Chevrolet counts 23 different passenger-cargo configurations for the seats. 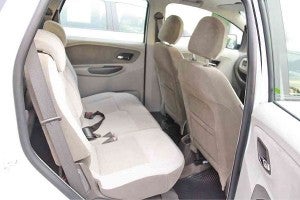 There are two available powerplants for the Spin, a 1.3-liter diesel engine with 74 horsepower and 190 Newton-meters, and a 1.5-liter DOHC 16-valve gasoline engine with 106 HP and 148 Nm. The diesel mates to a five-speed manual gearbox, while the gasoline variant is paired with a six-speed automatic. There’s a manual mode for the automatic, via a thumb button mounted on the gearlever. In the gasoline with six-speed auto, we easily registered more than 13 kilometers per liter, in mostly highway driving. Gears are well-spaced for reasonable acceleration, with an extratall sixth gear for efficiency. 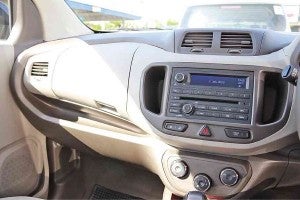 ENTERTAINMENT features are more than enough.

Outside, the Spin features a modern two-box look, with the familiar Chevrolet split grille. Standard roof rails and fog lamps add utility while helping the car look more upscale. A high belt line adds to the impression of greater size, particularly in the lighter exterior colors.

The interior is functional and welcoming, with soft fabric seats and a twin-cockpit dashboard layout. Chevrolet’s favorite gimmick for the moment, the motorcycle-inspired digital cluster that combines a rotary tachometer with a digital speedometer and fuel gauge makes its way to the Spin. This time, it’s mounted in a conventional hooded binnacle. Storage abounds in the Spin, with 32 bins of various sizes dotted throughout the cabin. There are multiple cubbyholes and cupholders in the cockpit alone, 10 of them for just the driver and front passenger, not even counting the glovebox. The steering wheel has the same look and thick rim as found on the Sonic, without the remote audio controls. It tilts but does not telescope. Dual air-conditioning is standard, with individual vents for both second- and third-row seats. 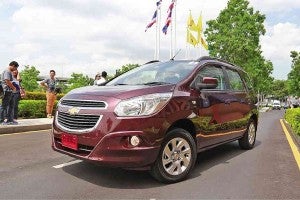 THE SPIN features a modern two-box look, with the familiar Chevrolet split grille.

The Spin has a handy USB port and aux input beside the gearlever. iPod integration allows control of the music player from the head unit. Audio quality is pleasant; the system is capable of Bluetooth music streaming.

As the Spin is positioned as a family vehicle, safety features such as dual airbags and ABS brakes will be available. The rear seat gets three-point seatbelts, with the middle second-row passenger getting a lap belt. 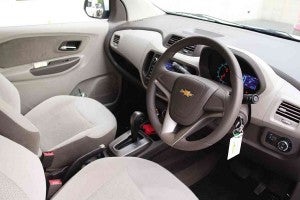 THE INTERIOR is functional and welcoming, with soft fabric seats and a twin-cockpit dashboard layout.

Albert Arcilla, president of The Covenant Car Company Inc., Chevrolet’s exclusive distributor in the Philippines, sees a sizeable market for the Spin. “The Philippine B-segment generates sales of 6,000-7,000 units per year. With the Spin, which has the largest width and length in the segment, Filipinos will appreciate the space. The Spin is loaded with features, and will carry the Chevrolet five-year warranty and 10,000-kilometer service interval.” 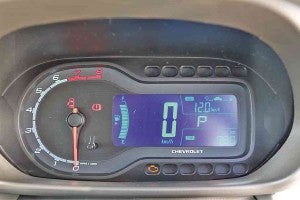 The Spin’s passenger-car underpinnings result in good handling and a comfortable ride. On both smooth highways and pockmarked roads, the Spin proved to be composed and pleasant. The body structure felt solid, with well-suppressed road and wind noise. After a 200-km drive around Thailand, the Spin delivered both driver and passenger still fresh and able.

The Spin MPV is a global car, designed in Brazil and built in Indonesia. Chevrolet is set to give cars like the Toyota Avanza and Nissan Grand Livina a run for their money when it launches the Spin in August.