DOH plans to wipe out polio 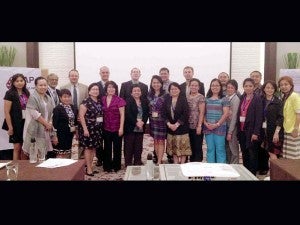 TAYAG (fifth from left, back row) leads local and foreign experts who attended the 4th Asian Vaccine Congress held in Cebu, which discussed among others, the enormity of working against eradicating polio in the face of the planet.

Polio is an incurable, extremely contagious and life-altering disease caused by a virus that spreads from person to person, attacking the brain and spinal cord.

Although polio could strike at any age, children younger than 5 years are most at risk of contracting the disease that could cause permanent crippling in one out of 200 cases.

Polio has no cure. However, vaccination has been proven to be the best way to protect oneself as well as the only way to stop the disease from spreading.

While immunization efforts have reduced the number of polio cases by more than 99 percent globally—saving more than 10 million children—polio has remained prevalent in Nigeria in Africa as well as Pakistan and Afghanistan in Asia.

However, according to the World Health Organization, as long as a single child remains infected, children all over the world are at risk of contracting polio.

The WHO warned that complacency will be dangerous because failure to eradicate polio from the last three remaining countries could result in as many as 200,000 new cases every year. If not addressed, polio has the potential to spread once more all over the world within 10 years.

He warned that because of high population density, presence of numerous sea and air ports, large number of areas with low immunization coverage and low detection rate, there is a high probability that the Philippines could import wild polio virus (WPV) as well as experience an outbreak of circulating vaccine-derived polio virus (VDPV).

Tayag said: “To ensure that every child in this country is immunized, the 2014 budget of the Department of Health for the immunization program was increased to P3.4 billion. This is P1.5 billion higher than this year’s P1.9-billion budget. The Expanded Program on Immunization (EPI) is the government’s way of combating vaccine-preventable diseases.”

The EPI, which aims to eliminate not only polio but also tuberculosis, diphtheria, tetanus, pertussis measles and rotavirus, has already benefited some 700,000 infants from the 5.2-million families identified as poorest of the poor by the Department of Social Welfare and Development through its National Household Targeting System.

“It is possible to eradicate polio in the face of the planet and that initiatives, like the EPI, will provide benefits by being able to save billions of dollars in low-income countries,” said Dr. May Montellano, president of the Philippine Foundation for Vaccination, as she presented a polio eradication and end-game strategy during the congress.

Montellano also explained that aside from following the current Global Polio Eradication Initiative strategic plans, DOH is currently looking at different options in its eradication strategy like the introduction of inactivated poliovirus vaccine (IPV) within the next three years.

Adoption of this strategy would result in the interruption of WPV and circulating VDPV, long-term containment plans and eventual total eradication of polio within a specific period of time.

During the congress, Dr. Emmanuel Vidor of sanofi pasteur presented the importance of IPV in the eradication of polio and discussed the key drivers and considerations in the introduction of new vaccines in the national immunization program. He even warned about how trivalent oral polio vaccine efficacy has declined over the years and the imminent threat of new outbreak of circulating VDPVs.

Indeed, history has shown how cruel polio could resurge more easily than it is contained. Considering that there is a significant risk of having more polio cases this year and the chance that it could spread to more countries, health officials and experts during the congress urged that the current program receive a level of priority and that it not only mitigate the risk but also finally stop the transmission.

A region can be certified polio-free when there are no new cases of polio within a 3-year period; the disease-surveillance efforts for a country meet international standards; and a country proves its ability to detect, report and respond to imported cases.

Achieving this goal will mark the second time in history that a disease has been wiped out: The first one was smallpox.