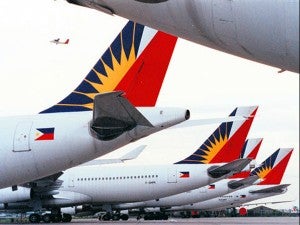 PAL already flies to Australia, while Cebu Pacific hopes to start using its entitlements as it expands its fleet with long-haul aircraft this year. FILE PHOTO

The Philippines and Australia have again failed to reach a new air deal this week to increase passenger traffic between them due to some “outstanding issues,” the Civil Aeronautics Board (CAB) Thursday said.

This means CAB may have to forego for a “few more months” its goal of doubling the current 6,000 seat entitlements a week, which translates to about 33 flights, CAB executive director Carmelo Arcilla said.

CAB and its Australian counterpart held talks from June 18 to June 19.

“The Phil-Australia air talks did not result in the signing of a new MOU [memorandum of understanding],” Arcilla said in a text message. “At the end of the two-day meeting, the two sides were unable to … settle some outstanding issues related to the level of expansion desired by each country, as well as commercial opportunities for the airlines.”

Arcilla did not elaborate on the nature of the issues and said it was not the agency’s practice to release details given the sensitive and complicated nature of the negotiation process.

The CAB executive noted that part of the talks involved so-called fifth freedom rights, which allow an airline to fly passengers from its home country to a second country where it has an existing air service agreement, and further to a third destination.

The first freedom right, the most basic, involves the right to fly over another country without landing. Other rights mainly involve the transport of passengers between two countries under an existing agreement.

Arcilla said the Philippines would request additional seats because local carriers are rapidly expanding overseas, and Australia is an attractive destination.

Local carriers have yet to exhaust the current 6,000 entitlements, with 60 percent to 70 percent of the allocation awarded to Philippine Airlines Inc. and Cebu Pacific, Arcilla said.

PAL already flies to Australia, while Cebu Pacific hopes to start using its entitlements as it expands its fleet with long-haul aircraft this year.

Cebu Pacific, a unit of JG Summit Holdings, is “the first on the list of applicants” for more seats to Australia, Arcilla said.

“The Philippines aims to expand the entitlements to allow the projected growth and expansion of the Philippine-Australian market,” he said.

TAGS: PAL already flies to Australia, while Cebu Pacific hopes to start using its entitlements as it expands its fleet with long-haul aircraft this year.