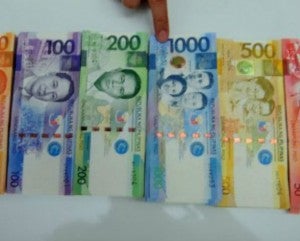 Local financial markets on Thursday were shaken after the US Federal Reserve signaled that the regime of easy money—which has inflated asset valuations in emerging markets—would end by next year.

But Philippine economic managers called for calm, saying that a more solid recovery of the US economy would benefit the Philippines in the long run.

The main-share Philippine Stock Exchange index on Thursday shed 186.53 points, or 2.86 percent, to close at 6,326.67, tracking the slump across global markets.

The peso, along with other Asian currencies, also weakened following the announcement of the US Fed Open Market Committee (FOMC). The local currency hit an intraday low of 43.76 against the dollar before it closed at 43.80—its weakest level since January of last year.

“Most forecasts were below 40:$1. Very few believed [the peso] would depreciate,” Ravelas said.

BDO projected the peso to end the year at 42.10 against the dollar.

In a research note, investment bank BofA Merrill Lynch described 2013 to be the “high watermark” of the liquidity era.

“The FOMC statement was more hawkish than expected. Bernanke anticipates tapering to begin late this year and QE (quantitative easing) to end by the middle of next year. Our economists see the Fed’s forecasts as optimistic and low inflation as a growing concern. So, while the likelihood of fourth quarter tapering appears to have increased, they still believe early 2014 tapering is the more likely outcome,” Merrill Lynch said.

Financial markets have begun pricing the possibility of the US Fed unwinding its aggressive bond-buyback program, or QE, weeks ago, dragging down the local stock index by as much as 17 percent from the recent peak of around 7,400.

But many analysts say that, eventually, markets will again focus on the country’s fundamentals which, in turn, will boost Philippine assets.

“The situation could be a result of quick reaction to the recent announcement of the Fed’s view and policy intention,” Bangko Sentral ng Pilipinas (BSP) Deputy Governor Diwa Guinigundo said in a text message to reporters. “The market seems to be still digesting the full meaning and impact of the Fed view.”

Finance Secretary Cesar Purisima echoed the BSP’s optimism, saying a recovery in the country’s export market should lead to even faster gross domestic product growth in the coming months.

The Philippine economy grew 7.8 percent in the first quarter of the year, even though the value of goods exported by local firms dipped 12.8 percent. “Just imagine if our export sector starts growing again,” Purisima said.