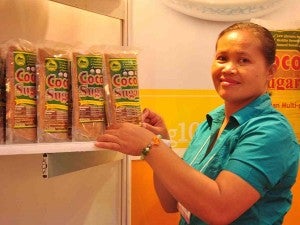 DAVAO CITY—The gathering of coconut sap has always been the domain of tuba gatherers in the country but in a small village in Misamis Oriental, family members were seen lending each one a helping hand in performing the task.

Linabu, however, is not Balingasag town’s tuba capital even if family members would gather at least three times a day as they pour on large vats or containers the saps that their kin had collected from the towering coconut trees.

Since five years ago, the sight of family members helping each other in gathering coconut sap has always been the scene in the village.

The gathered sap would then be turned over to the Lampco office and they earn money, not just a few bucks, but modest amount of cash enough to better their lives, according to Pejoro.

“We have noted that the quality of lives of the farmers has significantly improved,” she says.

The sap that Lampco members from 49 family-members gather turns into coco sugar at the Lampco mini factory inside the village.

It is also increasingly becoming a phenomenon because of its supposed good role in one’s health and has been selling hot in such countries as the United States and Japan.

Because the end-product has become Lampco’s cash cow, family members doubled their efforts, and from just 5-ton a month, their cooperative’s coco sugar production has since doubled.

These days, “a lot of farmers in the area have motorcycles, which they use for daily commuting, while others were able to send all their children to school, without compromising their other basic needs,” Pejoro, beaming with pride, says.

She adds the good things happening at the cooperative were brought in by their participation in government-sponsored trade fairs in the past, such as the International Food Exhibition (Ifex) in 2010.

To boost its marketing strategy, Lampco also adopted the tagline “Coco Sugar: A Smart Way to be Healthy.”

The Mindanao Development Authority (Minda), which has been assisting emerging ventures as Lampco’s, says in a statement that at the recent Market Week Philippines, Lampco was the top grosser in terms of sales and total amount of orders placed.

Market Week Philippines was a trade fair and showground of on-sale world-class items and products, Minda, Malacañang’s development arm in the south, says.

Minda says like Lampco, it—along with the Department of Trade and Industry and the Department of Agriculture—is also assisting 70 other Mindanao-based food producers, exporters and processors to participate in next year’s Ifex—the largest gathering of emerging and established businesses in the country.

Pejoro adds Lampco knew the importance of Ifex, which was why the cooperative will be participating in it anew next year.

“It was during our first Ifex participation in 2010, when we were able to close a deal with various coco sugar consolidators in Manila, which demanded up to five tons of coco sugar per month,” she says.

Pejoro adds that clinching the deals during the first Ifex was considered “a huge leap for the cooperative given its humble produce of at least three kilos per day at the beginning.”

“We are currently producing at least 10 tons per month, and we are thrilled by this increased demand for healthy and organic sugar,” she cites.

Another good thing that came to Lampco, Pejoro points out, was the recent certification of its coco sugar by Iberica Ambicert, the Spain-based subsidiary of organic-products certifier Ecocert, as carbon-neutral and genuinely organic.

The Europe-based Ecocert is recognized worldwide—including by the US Food and Drugs Administration—for its credible identification of products as purely organic.

Lampco’s Pejoro states the shift to coco sugar production was not an easy path for the cooperative, whose members were mainly copra producers.

First, she says they had to hurdle the mindset that copra production was easier as one only needed to harvest mature coconuts on a trimester basis.

“Coco sap, the main ingredient for the coco sugar, needs to be harvested at least three times a day,” she says.

Another thing, Pejoro says, was that their members were initially against using organic materials in their coco farms because it was perceived as more labor extensive.

“This means huge additional work for the farmers, but when they realized that it was a better source of income, they eventually joined the loop,” Pejoro adds.

Other things that helped convince Lampco members to shift to coco sugar production was the continuous prodding and assistance from government agencies, including the Department of Agrarian Reform (DAR).

Such that today, it’s not only family members who help each other gather sap.

At the cooperative’s packing area, they help one another in packing coco sugar by kilo and sachets.

Pejoro says they were looking forward to the day when Lampco members and those in neighboring villages could buy more than just motorcycles and would be able to send their children even to expensive and exclusive schools.

She adds as far as they were concerned, it was not a farfetched projection.

Read Next
Along Mt. Bulusan’s foothills: A balmy ‘agricultural resort’
EDITORS' PICK
Alex Eala wins Grand Slam on Independence Day: ‘I hope I made my contribution to the country’
EDITORIAL: Good news, bad news
1Sambayan to nominees: Stick to word of honor
Trust Robredo’s political instincts – Kaya Natin! convener
Ahead of ONE: Full Blast II, Mongkolpetch warns Elias Mahmoudi: ‘Watch out for my fists’
Kai Sotto continues to inspire Filipinos by sharing his passions and stories with Smart Prepaid
MOST READ
Duterte, Mayor Sara unlikely to run under same slate in 2022, says Lacson
China cautions G7: ‘small’ groups don’t rule the world
1Sambayan to nominees: Stick to word of honor
Leni vs. Sara
Don't miss out on the latest news and information.