Is Manila ready for a Formula One race? | Inquirer Business

Is Manila ready for a Formula One race? 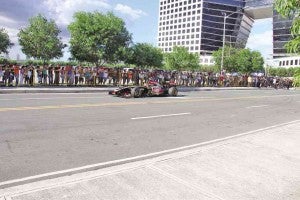 STOCKINGER wows the crowd on the side streets of SM Mall of Asia.

Manila was the setting of a unique thrill last weekend: the sight and sound of a Formula One car roaring through the streets around Quirino Grandstand and the Mall of Asia. Dubbed the Manila Speed Show, the event featured Filipino-Swiss racer Marlon Stockinger behind the wheel of a Lotus F1 car. The 22-year-old racing driver is part of an elite group of seven racing drivers picked by the Lotus team to train and compete at the highest levels of motorsports.

The event naturally begs the question: Can Manila host a Formula One event in the near future? Asean neighbors have paved the way, with Malaysia constructing a racetrack specifically to F1 standards and holding its first F1 Grand Prix in 1999. Nine years later, Singapore literally took over the spotlights as it hosted the first night race in F1 history. Aside from the nighttime setting, what makes the event attractive is its being held on the regular streets of the city-state, with its landmark buildings such as the Fullerton Hotel and the Esplanade serving as a photogenic backdrop. The intention is no doubt to emulate the success of racing on the original street circuit, the glamorous Monaco.

The approach—to hold racing on city streets instead of a purpose-built track—has many advantages. Attracting spectators is easier if the race is held in the city, making travel more convenient. The city also benefits from being promoted to a worldwide audience. Tourism revenues accrue to the businesses in the area, particularly hotels and restaurants. But some Singapore establishments in the Marina Bay area have been heard to grumble that the race is actually deleterious due to its disruption of transportation services. 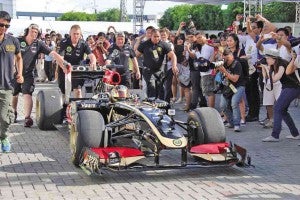 MARLON Stockinger gets clearance from the technical crew for his final run at the SM Mall of Asia last Sunday. Photos by Alvin Uy

With those attractions in mind, several cities have proposed holding street races. New Jersey is poised to join the calendar, with the skyline of New York City as its backdrop. A race on the ancient streets of Rome may be next. Closer to home, Thailand is preparing for a street race in 2015, in the area adjacent to the Chao Phraya river. Can Manila join this group of cities that see F1 as a coming-out party second only to the Olympics?

First to be considered would be financing. The Singapore Grand Prix has been budgeted at 150 million Singaporean dollars (P4.92 billion), wit the the government picking up the tab for 60 percent of that amount (almost P3 billion). Even with the purportedly improved local business climate and fuller government coffers, it would be a stretch to say that the amount would be easily affordable. It would be equivalent to almost 1 percent of the budget for education, or almost the entire budget for the tourism department. Private companies might take up some of the slack in financing, but in all likelihood the majority of the budget will still have to be shouldered by the Philippine government.  Then again, it would be a worthwhile way to spend a mere fraction of those pork barrel funds. 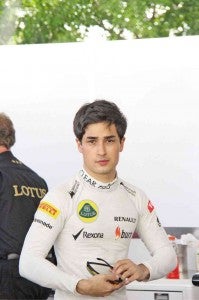 Thailand has another industry to promote in hosting an F1 race: its burgeoning car assembly and manufacturing sector. The Philippines has so far been a laggard in this area, with our sales a mere fraction of our Asean neighbors’. If the industry can be boosted by sensible government policies on taxation and labor, then the auto industry can support such a race. With several manufacturers poised to return to F1 (at least as engine suppliers) including Honda, they could take up some of the slack in funding.

The next obstacle would be the logistics of the event. Putting up a street circuit is a major feat of organization and planning, with kilometer of barriers, bleachers, signages, and rerouting. And that’s without the installation of projector lamps needed for a nighttime race. Holding the race at the edge of the city, as is done in Singapore, helps take out some of the impediments.

Mark Desales of the Automobile Association of the Philippines (AAP) has serious doubts whether an F1 race can ever be run in Manila. The AAP transported the F1 cars during the Speed Show weekend. “We don’t have enough streets for an F1 race. No one will agree to close down major streets for almost two weeks.”

Facilities inside the city and also the ease of travel would have to be considered. Having up to 100,000 attendees arrive on race weekend might bring our creaking airports to the breaking point.

The city and national government would also have to consider the safety of the participants and spectators. Securing a large area from thieves, terrorists, curious onlookers, and stray dogs and cats would be a daunting task. Hosting a race doesn’t guarantee that a city will suddenly become a hot tourist destination. The Singapore GP is successful because the city itself is a safe and attractive place to visit, and not the other way around.

Another factor to consider would be the roads themselves. Tight city streets and Formula One cars are not exactly an ideal match, with F1 champion Nelson Piquet famously describing the Monaco GP as a helicopter ride around your living room. The roads would have to be properly paved and graded, and that would also cost a lot of money.

We have to take a thousand steps then, before the Philippines could even knock on Bernie Ecclestone’s door and ask for a slot in the calendar. That hasn’t stopped other determined, clever cities and national governments from trying. With Marlon Stockinger being potentially the first Filipino to get a driver’s seat in the world’s highest form of motorsports, there has never been a better time to consider hosting a Formula One race.