Innovative technology wrapped up in a sexy red dress, the all-new Mazda6 is the new benchmark

Mazda6 is the first vehicle to have the full range of Skyactive technologies, including idle stop and energy recapture.

Executive sedans don’t usually elicit a strong emotional response. But the Mazda6 is a different animal. When the cover was pulled from the deep red car at the center of the Japanese carmaker’s booth at the Manila International Auto Show, there was a gasp of appreciation from the assembled crowd. Then, spontaneous applause. It was the first indication that Mazda may very well have a hit on its hands.

A few days later, we had our second encounter with the 6, away from the floodlights and dramatically designed platform. This was at dusk, at the tightly-packed parking lot of the Inquirer. Still, the car was immediately visible from across the lot, its bright “Soul Red” paintjob shimmering in the fading daylight. And for the next few days, we would not be able to keep our eyes from locking onto the sedan whenever we passed it. We soon learned that this was no accident. Mazda created a new paint process for the 6, using two colored coats of paint rather than the usual single color and clear top coat. The base coat has a high concentration of aluminum flakes, forming a highly reflective layer. On top of that goes another coat of paint, a semi-translucent layer with the high-chroma, very intense red color. Light shines through the top layer and is reflected back by the metallic coat. The result is a shimmering, radiant finish that appears to glow when caught by the light, while the parts of the car in shadow appear very dark.

19-inch wheels complement the Soul of Motion styling of the 6.

The innovative paint scheme is the finishing touch to the Mazda6’s shapely new bodywork. The new styling is called Kodo-Soul of Motion, first seen on the new CX-5 SUV. On the front, this means beady headlamps flanking a large pentagonal grille, with a smaller trapezoidal grille in the bumper, each with black horizontal slats. A satin chrome element underlines the upper grille, extending into the headlamps. The lights are complex units that incorporate LED daytime running lights. The profile is marked by a cabin-rearward stance, with the base of the A pillars moved back from the front wheels. Mazda’s trademark cycle fenders are retained, but are integrated much better, arching from the front doors to the bumper. The roof is a single arc that gracefully blends into the trunk section. 19-inch alloys wrapped with low-profile Bridgestones amply fill up the wheel wells. Compared to the more showy exterior of Mazda’s previous generation of models, Kodo is a more sophisticated design language, while being distinctive. 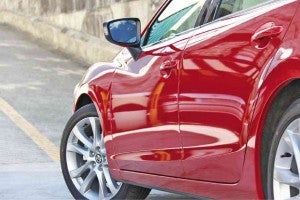 MAZDA developed a new paint process for the Soul Red color, resulting in a deep, rich hue that seems to radiate from within.

Inside, Mazda is still up to its old tricks of using at least six different types of finishes and combining them into a harmonious whole. Seats, steering wheel and gearshift are trimmed in black leather with red stitching. Soft-touch plastics abound everywhere, with metallic strips acting as accents. There’s an expanse of a deep, chocolate brown not-quite-wood across the dashboard. The audio unit is the same as the CX-5’s, mounted high on the center and using a touchscreen interface. Gauges are brightly lit using white LEDs. The rightmost gauge displays trip computer information, as well as two display screens you won’t find on any other car: the status of the iStop and iEloop systems.

iStop and iEloop are the most noticeable part of Mazda’s new range of Skyactive fuel-saving technologies. iStop simply means a start-stop system, one of the first in this class of vehicle. The engine automatically shuts down when the car is at a standstill, and quickly restarts when the driver releases the brake pedal. The Mazda system shuts down the engine at the optimum point in the combustion cycle, at the ignition-expansion stroke. By using combustion energy for the restart, it helps save more energy as well as allows the fastest available restarts, at 0.35 seconds. During our driving, the idle stop system only initiated shutdown when we pressed firmly on the brake pedal (the instrument panel will helpfully remind you of this). This prevents untimely and unintended shut downs, such as in cut-and-thrust bumper to bumper traffic, or when crossing an intersection.

iEloop is a unique energy-recapturing system that uses a capacitor to store energy during deceleration and release it for use when the engine is shut down. By using a capacitor instead of a conventional battery, the system charges up more quickly, in around 10 seconds, which is the usual length of time for a deceleration cycle. The energy stored is then released when the engine shuts down, powering the electricals for up to one minute. iEloop frees the engine from having to generate electrical current most of the time, thus saving energy. Plus, seeing the capacitor charge up and release energy via the dashboard indicator is quite cool. Mazda quotes 11.7 km/liter in city driving. In our few days of city driving, including a two-hour slog through snail’s pace traffic across the city, the 6 still managed more than 7 km/liter.

If all of that sounds like Mazda has become an environmental saint rather than a proponent of its Zoom-zoom mantra, one burst of quick driving had us relieved; driving fun is  still at the center of the Mazda experience. The 2.5-liter inline-four to which the iStop and iEloop are attached is a powerful unit: 183 hp and 250 Nm. Mazda’s new range of engines uses a high compression ratio to deliver a reported 15-percent increase in torque while also cutting fuel consumption. The 6 is reasonably quick, Mazda quoting 7.8 seconds from 0-100 kph, and a 223 kph top speed. Acceleration while on the move is brisk, thanks to the responsive six-speed automatic and that high-compression engine. Stubby paddle shifters are mounted on the steering wheel if you wish instant downshifts.

Another component of the Skyactiv technology is a lighter-weight chassis, with the use of high-strength steel maintaining rigidity. The 6 checks in at 1360 kg, several hundred kilos lighter than some of its Japanese rivals. The slimmed-down body also pays dividends when it comes to handling, the D-size sedan remaining agile and confident on both tight turns and long, sweeping corners. It’s quite nonchalant about it, too. No showy moves or harsh behavior here, just a smooth, balanced performance commanded by the quick ratio of the steering wheel.

Being comfortable is the entire point of an executive sedan, and the 6 delivers here, too, with a supportive driver’s seat, and ample room front and rear. With motorized adjustment and memory function, plus a telescoping steering wheel, it was easy to find an ideal position. The previous Mazda6s have always had a good view out the front, and this one, with its pulled-back windshield position, is no exception. Parking and maneuvering is easier thanks to a backup camera and sonar sensors both rear and front.

ALL about technological prowess.

THE 6 has a roomy, comfortable interior, with an interesting mix of materials.

Mazda has come up with a sedan that is one of the most desirable on the market, price no object. The best part is that, with all the features and technology on board-iStop and iEloop are standard-the car has a very reasonable price, at P1.705 million. Under Mazda’s new Yojin3 program, all periodic maintenance for the first three years is free. The 6 is a fitting flagship for the brand’s new style direction and new-found technological prowess.