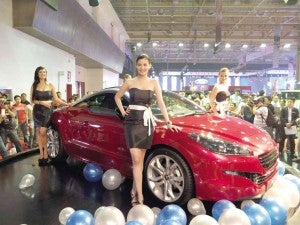 THE MIAS was also about the booth babes.

The Manila International Autoshow is the real auto show for enthusiasts and consumers alike because there is so much available interaction: there’s a lot of merchandise available for sale, you get to talk to industry experts and leaders, see one hell of a stunt show, plus ogle endlessly at the hottest babes in town while avoiding the girlfriend’s/missus’ dagger looks.

Seriously, unless you’ve been living under a rock for the past nine years, you’ll know that there are only a few shows that are as universal, but not as stiff, as the MIAS. But it can be made better. Here are some things the organizer, Worldbex Services International, should look into.

1.) Make the event and venue more child-friendly. When I dropped by last Saturday, the third and probably the busiest day of the show, throngs upon throngs of young families came over to admire the latest cars, gadgets, accessories and modified cars. But the exhibitors, along with the organizers, could have included a child-friendly zone, or give kids special access. Kids today are more technically proficient;  we need to nurture their dreams, that is, the love of cars, which represents freedom for all of us.

2.) Entry-exit points need to be re-thought.  You need to go through the entire display sections (the main hall and three more satellite pavilions or display areas) inside the World Trade Center complex to get out. If you wanted to see  the test-driving activities, you have  to go the same route again.  It was a such huge effort to circle in and out of the building which was, probably, a disservice to all the car companies who were giving the test-drives.

3.) Ensure security. A friend of mine had her phone stolen there in a split-second. With that, perhaps, the event needs to station security personnel in every display area,  near the main counters or lounge areas of the display. Of course, we all need to mind our own business (and our personal belongings), but having security personnel to act as deterrent for criminal elements  helps. 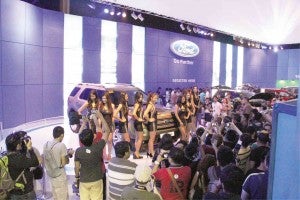 THIS SHOW is about bringing in people who love cars.

4.) Widen the area for shows. The Russ Swift stunt-driving area, the loading area at the back of the World Trade Center’s main building, needs to be widened if the event is to still take place there for the next 10 years. Currently, there’s a large area that is curbed up on one side of the road, with the other side covered in dirt and  used only for parking space. Worldbex should formalize an agreement with the World Trade Center to cement the aforementioned area to increase the stunt-driving space and  spectators’ areas.

5.) Standardize PA system. Worldbex should standardize the music/PA system at the main display hall, at the least. It’s quite confusing enough to be bombarded by loud music, but to have multiple songs being played at full blast by the various exhibitors is like being in the middle of the warzone and akin to getting shell-shocked. It’s not very professional  when everyone’s playing  different beats at full blast, and the PA system doesn’t work effectively this way, such as a few times when drivers were being called out to move their illegally parked cars away from the driveway, which impedes traffic flow. Most international car shows do it this way so there’s less confusion. It also makes the place more child-friendly.

Aside from these things, it was great being at this year’s MIAS because of the following reasons:

1.) The Russ Swift stunt show. The Russ Swift show, which has been around for ages, never seems to get old and never fails to impress and delight the crowd. I found myself being part of the show, unknowingly volunteering to participate in the stunt show. If I had died, my wife would have killed me again! But it was worth the fun and excitement! Thankfully, with the addition of the Subaru BRZ, the show was altered significantly and more people were allowed to be part of it to witness first-hand Guinness Book of World Records holder Russ Swift do his precision stunt driving!

2.) Tons of car stuffs. The retail area was packed with loads and loads of aftermarket parts suppliers. Everything from car batteries, tools, car care products, car audio and electronics equipment was on hand selling their products at unbelievably great deals.

5.) The cars. At the end of the day, this show is about bringing in people who love cars. Even the most ardent non car-guy who actually went through the trouble of driving up to the heavy congested Pasay City, take almost an hour to find parking, pay P100 to get in (which is well worth it!) and squeeze through a thick crowd with loud music blaring must love cars in one way or another.

There were many newcomers to the event, particularly some of the Chinese car companies and diesel truck giant MAN (which I tried getting into, but was unfortunately locked out).

With all that has happened at the MIAS 2013 show, I really do wonder how the organizers will outdo themselves next year, which will be  the MIAS’s 10th year. Goodluck to the organizers and see you all next year!