‘No reason to fire Ruffy Biazon’ 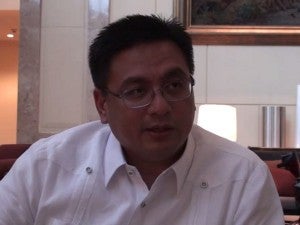 Malacañang is standing by Customs Commissioner Rozzano “Ruffy” Biazon despite the massive smuggling of petroleum products into the country that industry leaders claim is costing the government at least P30 billion in forgone revenue annually.

Presidential spokesperson Edwin Lacierda found no reason to replace Biazon at this point.

“If there is evidence, and there are reports, we eventually conduct an investigation. In the BOC (Bureau of Customs), Commissioner Biazon is color-blind to whether you’re a big player or small player. If you’re involved in smuggling, we will investigate you,” Lacierda said at a briefing.

Asked if Biazon continued to enjoy the trust and confidence of President Aquino, Lacierda said: “For now, of course, yes. Yes.”

Mr. Aquino’s allies and administration senatorial candidates are blaming the BOC for its failure to curb the smuggling of petroleum products like gasoline and diesel.

Reelectionist Sen. Francis Escudero, an independent running under the Team PNoy senatorial ticket, said it was unlikely that billions of pesos worth of fuel could pass undetected by customs officials in the country’s ports.

“The smuggling is not being done at sea but most likely at our doorsteps. As the saying goes, there’s none so blind as those who refuse to see,” Escudero said when asked if the government should spend more to improve customs detection equipment or to buy more patrol boats to protect the archipelago’s long coastline.

Escudero called for “top-to-bottom changes” in the BOC and invoked the lateral attrition law that provided for penalties for government officials who fail to perform their duties.

“The unabated smuggling of oil products and other commodities indicates a massive failure of the BOC, requiring top-to-bottom changes to be effected within the agency,” Escudero said.

Sen. Panfilo Lacson, a close ally of the President, said it was quite simple to crack down on smuggling in the country if only those in charge would do their job.

“It’s not rocket science actually. It starts with an efficient collation of data and records of inventory, sales, importation and tax payments which are all available anyway. Then make accountable all personnel who have been remiss in their duties,” Lacson told the Inquirer.

Lacson, a former chief of the Philippine National Police, said that as long as “the authorities concerned do not practice a no-nonsense application of customs laws and do not apply the regulations against erring personnel, smuggling being a lucrative business will go hand in hand with corruption, which is equally lucrative.”

Asked whether the President found Biazon’s performance satisfying, Lacierda said: “Yes. In fact, he’s aware of the problem and so, together with (Finance) Secretary (Cesar) Purisima, and together with the other agencies involved, we are making sure that we will be able to curb smuggling.”

Lacierda said the government would not hesitate to go after oil players, big or small, and their accomplices in the renewed drive to curb oil smuggling.

Lacierda said he was not blaming the entire BOC for the smuggling problem which seemed to have run unabated under the Aquino administration.

“I didn’t generalize. And, also, there are other officials who are involved, not necessarily with customs (alone). If you have leads, or evidence leading to their participation in this crime, then we will be more than happy to investigate,” he said.

Petron Corp. chair and CEO Ramon S. Ang has said that one in every three liters of fuel sold in the country has been smuggled in. He said the country was losing anywhere between P30 billion to P40 billion yearly due to the smuggling of petroleum products.

Shell country manager Edgar Chua, on the other hand, said the volume and value of oil products coming in could be understated resulting in smaller tax payments.

One more scheme, Chua added, was of a tanker out at sea filling smaller vessels that would then deliver smuggled fuel directly to small storage facilities.

“It is the BOC that is ultimately responsible for any and all smuggling. They should do more to curb and prevent it. They should address this issue squarely and not simply set it aside or sweep it under the rug so to speak,” Escudero told the Inquirer.

“Ultimately, I want to see them file charges against smugglers and those in the BOC who are coddling, protecting or tolerating it,” he added.

Aurora Rep. Sonny Angara, a member of Laban ng Demokratikong Pilipino running under the administration’s Team PNoy senatorial slate, said the smuggling of fuel into the country must be quite demoralizing to law-abiding companies.

“Oil smuggling, all forms of smuggling, is highly pernicious and demoralizing to legitimate businessmen. It’s obviously incompatible with the daang matuwid (straight path) and we expect authorities to do something about it,” Angara said in a text message.

Another administration senatorial candidate. Benigno “Bam” Aquino IV, a cousin of the President’s and a member of his Liberal Party, said the government should have a stronger enforcement of the country’s customs laws.

“The perpetuation of smuggling creates an uneven playing field which has a negative effect on our industry. Our economy will grow faster with sound competition policies and a level playing field for all,” Aquino said in a text message.

“Government should have stronger enforcement backed by legislation that supports and protects our industries,” Aquino added.

With three years into its term, the Aquino administration can no longer blame the oil smuggling problem on any other leadership, and it must now finally ask its economic managers to account for their failure to resolve it, according to opposition senatorial candidate Mitos Magsaysay.

“They haven’t done anything. The losses amounted to P40 billion to P50 billion. This means somebody had been sleeping on the job to benefit from oil smuggling or because somebody in the administration is earning from it,” Magsaysay said.

Chevron Philippines Inc., one of the three biggest oil players in the country, is urging the government to implement stricter measures if it intends to curb the rampant smuggling of petroleum products.

Chevron said the government must implement a more rigorous enforcement process to fully collect the taxes from the importation of refined petroleum products. This move will not only shore up national government coffers but also create a better business environment wherein companies will enjoy a level playing field, it said in a statement.

The Department of Energy (DOE), the oil firm added, must also be given police powers to give it more teeth to enforce the rules.

Such police powers may include the ability to padlock or impose significant penalties on errant retail outlets that sell fuel that do not meet the Philippine national standards or retail outlets which do not issue valid receipts.

“While the country is currently enjoying very good economic prospects, the Philippines is missing out on vital foreign direct investments because there is limited confidence that the government can provide a level playing field for all industry participants,” said Pete Morris, country chair and general manager for international products of Chevron.

Jetti Petroleum said it was not engaged in smuggling and other illegal activities related to the importation of petroleum products.

In a statement, Jetti Petroleum corporate affairs manager Leo P. Bellas said “there has been no real case filed in the courts against our company and that we are also one with the government in resolving this issue once and for all.” With a report from Amy R. Remo