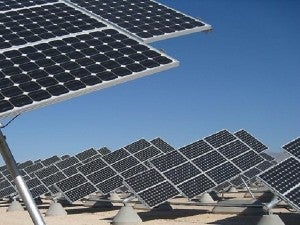 Solar-power plants of between three and five megawatts each are expected to be the first to supply electricity under the plan, Mario Marasigan, the energy department’s renewable energy bureau chief, told AFP.

“We hope to see the first new renewable installations… under the feed-in tariff system hopefully next year. The most immediate possibility is solar installation,” Marasigan said in an interview.

The so called “feed-in tariff” guarantees energy companies an extra amount of money above the market rate for every kilowatt of clean power they sell.

It was one of the main planks of a 2008 renewable energy law to spur investment and see half the country’s energy come from renewable sources by 2030, compared with about 39 percent currently.

Despite the move, bigger projects, such as geothermal and wind, remain up three to five years away, he added.

Industry and green groups have complained that since the law was introduced, the tariff scheme has been relegated to a low priority and got lost in red tape while the government has focused on boosting fossil fuel power.

The government only approved the tariff rates in July last year, and the government has not yet approved any of the hundreds of projects that have submitted applications to participate.

“It (the feed-in tariff scheme) needs a stronger push from the government… there is too much red tape in renewable energy investments,” Greenpeace Philippines’ program manager Beau Baconguis said.

However Marasigan defended the pace of the roll-out, saying that the government was introducing a completely new energy financing scheme and this took time to get right.

“A FIT (feed-in tariff) mechanism is relatively new to us… it took us a while to learn and really decipher what is the best means for us,” he said.

Read Next
PH salvation lies in export sector dev’t, says BSP
EDITORS' PICK
Cagayan gov endorses 10-day ECQ in Tuguegarao due to COVID-19 surge
Experience clearer calls nationwide with Smart VoLTE
No warrantless arrests despite DND-UP accord termination, says PNP spox
New Year, New Rediscoveries
Driving can be even more rewarding this New Year — here’s why
Biden team says US will not lift travel bans, despite Trump statement
MOST READ
Proposed toll for newly opened Skyway 3 ranges from P110 to P274
Duterte to firms: No franchise until you settle your accounts with gov’t
‘Hotbed of recruitment’: Lacson backs termination of UP-DND accord
Palace: Duterte’s ‘no payment of gov’t dues, no franchise’ remark covers all, even ABS-CBN
Don't miss out on the latest news and information.