How Citinickel managed its crisis 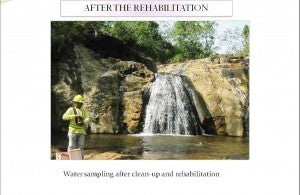 THE MINING company has cleaned up this picturesque spot near the town of Narra in Palawan.

Life goes on in the town of Narra in Palawan after the successful clean-up program implemented by Citinickel Mines and Development Corporation, Inc. (CMDC) on areas affected by the silt spill from its mines’ silt ponds.

Acting swiftly on the incident, CMDC, the mining unit of Oriental Resources Peninsula Inc.(ORE), installed environmental mitigating structures in the surrounding areas the day after the spill was discovered on Nov. 25, 2012.

The spill affected 70 farm lands in Barangay San Isidro, Narra and a stretch of the nearby Pinagduguan river. The 70 farm lands represent five hectares out of 102.75 hectares that is within the CMDC impact area.

CMDC thereafter ordered a suspension of all its mining operation from Nov. 26 to Dec. 9, 2012 so that all employees and personnel could focus on the clean-up of the river and the farms of all-organic materials such as silt and silt water. It should be noted that there could be no permanent damage to farmlands from silt spills because CMDC does not have a processing plant and as such, does not use chemicals in its mining operations.

“We did not waste time and commenced the clean up right away, even without being ordered by any government entity. CMDC has adopted a proactive stance on matters like this and we already have systems and plans in place that in the event something like this occurs, we are ready to implement them,’’ discloses Ferdinand Pallera, CMDC president.

CMDC remediation measures included vacuuming of sediments, manually and mechanically dredging silted water, and regularly testing of the quality of water in the affected areas until the desired results were achieved.

Pallera says in the morning of Nov. 26, 2012, when the discoloration of water in the open canals was discovered, members of the Citinickel Environmental Division immediately set out to trace its source.

“The resident manager closed and backfilled the diversion canal to prevent continuous flow of water and contain the effect of overflowing,” Pallera explains.

Environmental mitigating structures such as Gabions at the gullies where possible surface water run-off might occur, along with additional silt traps and canals were installed.

On Nov. 27, 10 percent of the main river Pinagduguan had already been cleaned up. Additional workers were commissioned to conduct manual dredging of the river and clean up of silted water in the adjacent rice farm.

Five days later, 50 percent of the silt overflow unto the Pinagduguan River had already been cleaned up. Manually harvested laterite silt on top of farm lots and the river bank were securely disposed.

Within 15 days, the affected farms and portion of the Pinagduguan River were restored to their former state, in an even better condition actually.

“The Department of Environment and Natural Resources (DENR) had closely monitored the progress and now the areas affected are as good as new. Everything around it is back to normal,” says Pallera.

Post-test results conducted by CRL Environmental Corporation, a PAO (Philippine Accreditation Office) accredited laboratory of the DENR, attest to the safety of the quality of water in Pinagduguan River which showed -2.5 mg/L in total suspended solids. The maximum allowable is 30 mg/L.

“That means the water is even safe enough to swim in and drink,’’ Pallera claims.

DENR issued a notice of violation to Citinickel after water spilled from its silt pond no. 2 at its Toronto Mining Area in Narra, Palawan. Citinickel paid P146,745 to six farmers whose farm lots were affected by the spill.

Citinickel Mines and Development Corp., is the mining unit of Oriental Peninsula (ORE), a public-listed 100 percent Filipino company, which operates two nickel mining projects in the Province of Palawan, located in the municipalities of Sofronio Espanola and Narra.