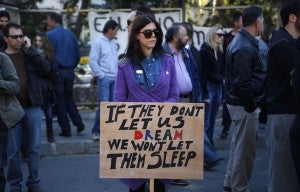 A woman holds a banner during a protest outside of the parliament in Nicosia, Cyprus, Monday, March 18, 2013. A vote on a bailout package for Cyprus that includes an immediate tax on all savings accounts has been postponed until Tuesday evening. AP Photo/Petros Karadjias

NICOSIA—Cyprus baulked again on Monday at putting an EU bailout to a vote in parliament as the crippling terms sparked a public outcry and mounting talk of a rethink by eurozone creditors, even as the uncertainty forced a prolonged closure of the island’s banks.

A Central Bank official confirmed that all bank branches on the island will remain closed until at least Thursday while politicians review with lenders an unprecedented demand for every account holder on the island to pay a tax of at least 6.75 percent on their balances as part of the rescue package.

Banks were closed anyway Monday for a scheduled public holiday but the uncertainty over the fate of the latest eurozone rescue package sparked jitters on world markets and fury from another key Cyprus creditor, Russia.

A final decision has to be taken on the details of the levy on balances before bank branches can reopen, or else there will be a run on accounts as depositors scramble to protect their money.

Eurozone finance ministers, who along with the International Monetary Fund demanded the deeply unpopular levy in marathon negotiations that climaxed early on Saturday, were set for new talks to review the deal, an EU official said.

“We really want to reduce the impact” on smaller savers but the “idea is still to achieve the same objective, (of raising) 5.8 billion euros,” the official said.

Eurozone leaders rejected a Cypriot request for 17 billion euros in rescue financing, insisting such a large debt would be unsustainable for the Mediterranean holiday island of less than one million people.

They offered just 10 billion euros, insisting the balance be made up from within the island, principally through the levy on bank deposits.

Hundreds of protesters gathered outside the parliament building in Nicosia to register their anger at the unprecedented tax, not asked of other eurozone countries that have sought rescue.

“Wake up, they are sucking our blood,” demonstrators called to their fellow Cypriots.

As they delayed the emergency debate, Finance Minister Michalis Sarris and Central Bank governor Panicos Demetriades told MPs they were seeking a fresh formula that would protect people with small bank deposits.

Parliament speaker Yiannakis Omirou said: “There are changes to the proposed government bill to be put forward, so we need more time in parliament and the finance committee to study these new proposals.”

EU officials confirmed that discussions were under way to amend the bailout package.

“If Cyprus’s president wants to change something regarding the levy on bank deposits, that’s in his hands,” European Central Bank board member Joerg Asmussen said. “He must just make sure that the financing is intact.”

Moscow, which has an outstanding 2.5 billion euro loan to Cyprus and billions more in deposits in the island’s banks, reacted angrily to the EU levy.

Estimates vary but the Moody’s rating firm estimates that Russian companies and banks keep up to $31 billion in Cyprus, which accounts for between a third and half of all Cypriot deposits.

“We should say this directly: this simply looks like the confiscation of other people’s money,” Russian news agencies quoted Prime Minister Dmitry Medvedev as saying.

The Cypriot finance minister is to visit Moscow on Wednesday and the government remains hopeful of Russian help.

The uncertainty over the EU bailout terms dealt a serious blow to global confidence by stoking fears that other eurozone countries in difficulty might be called on to take the same course of action.

Europe’s main stock markets lost ground and the euro fell under $1.30. Asian equities also fell heavily as did the price of oil.

“If European policymakers were looking for a way to undermine the public trust that underpins the foundation of any banking system, they could not have done a better job,” said CMC Markets analyst Michael Hewson.

After a rush to ATM machines by worried account holders over the weekend, the Association of Cyprus Banks urged customers “to remain calm and to avoid panic.”

The Cyprus stock market said it too would remain closed if the banks did. It said it had unsuccessfully sought exemption from the levy for an investment fund set up in an earlier bank rescue.

Washington called for a “responsible and fair” resolution of the crisis. “It is important that Cyprus and its euro area partners work to resolve the situation in a way that is responsible and fair and ensures financial stability,” the US Treasury said.—Charlie Charalambous