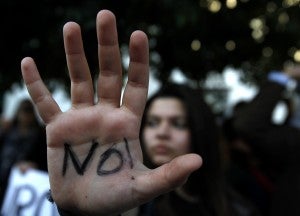 A protestor holds out her hand during a protest outside the parliament in Nicosia, Cyprus, Monday, March 18, 2013. A plan to seize up to 10 percent of savings accounts in Cyprus to help pay for a €15.8 billion financial bailout was met with fury Monday, and the government shut down banks until later this week while lawmakers wrangled over how to keep the island nation from bankruptcy. AP PHOTO/PETROS KARADJIAS

NICOSIA, Cyprus—A plan to seize up to 10 percent of savings accounts in Cyprus to help pay for a €15.8 billion financial bailout was met with fury Monday, and the government shut down banks until later this week while lawmakers wrangled over how to keep the island nation from bankruptcy.

Though the euro and stock prices of European banks fell, global financial markets largely remained calm, and there was little sense that bank account holders elsewhere across the continent faced similar risk.

Political leaders in Cyprus scrambled to devise a new plan that would not be so burdensome for people with less than €100,000 in the bank.

The authorities delayed a parliamentary vote on the seizure of €5.8 billion and ordered banks to remain shut until Thursday while they try to modify the deal, which must be approved by other eurozone governments. Once a deal is in place, they will be ready to lend Cyprus €10 billion ($13 billion) in rescue loans.

A rejection of the package could see the country go bankrupt and possibly drop out of the euro currency—an outcome that would be even more damaging to financial markets’ confidence.

Even while playing down the chance of fresh market turmoil, experts warned that the surprise move broke an important taboo against making depositors pay for Europe’s bailouts. As a result, it may have longer-term consequences for confidence in Europe’s banking system—and its ability to end its financial crisis.

“It’s a precedent for all European countries. Their money in every bank is not safe,” said lawyer Simos Angelides at an angry protest outside parliament in Cyprus’ capital, Nicosia, where people chanted, “Thieves, thieves!”

Eurozone finance ministers held a telephone conference Monday night, and concluded that small depositors should not be hit as hard as others. They said the Cypriot authorities will stagger the deposit seizures more, but they remained firm in demanding that the overall sum of money raised by the seizures remain the same.

In the short term, there was little sign of a new explosion in the European financial crisis. Stock markets dropped in early hours but stabilized by the close. The Dow Jones industrial average fell 62.05 points, or 0.4 percent, to 14,452.06 Monday. The euro fell 0.6 percent—a bad day, but hardly a token of impending doom. Government bond prices for Italy and Spain were roughly unchanged, suggesting that investors do not expect the market trouble to spread beyond Cyprus for now.

In part, that may be due to the fact that Cyprus’ case is by many measures an exception.

The decision to hit deposits up to €100,000 ($129,290)—the deposit insurance limit in Cyprus—with a 6.75 percent tax and those above that with a 9.9 percent tax was dictated partly by the unusual qualities of the country’s financial system.

Cyprus, with only 0.2 percent of the eurozone economy, has a bloated banking system seven times the size of the island’s economy. Losses on Greek government bonds had crippled Cypriot banks and required government money to bail them out. Meanwhile, a large proportion of deposits—37 percent—come from people outside Cyprus and the European Union, much of it from Russia.

European leaders wanted to limit the size of the rescue loans — which are backed by European taxpayers—to €10 billion. Leaders were also reluctant to bail out Russian depositors whose funds may be the result of tax evasion, crime or money laundering.

Dario Perkins, an analyst at Lombard Street Research, noted that “the German government couldn’t be seen bailing out Russian mafiosi just before an election.”

He said the bailout also showed that European leaders were willing to decisively confront Cyprus’ problem—rather than postponing the day of reckoning with a partial solution. “On one level, you could argue this deal is good news,” he wrote in a note to investors.

Officials say by tapping the depositors, they are reducing the total amount of debt taken on by the government, keeping it to a high but manageable 100 percent of GDP by 2020. That will mean less-painful austerity cutbacks than those that were imposed on Greece as a condition of its loans. Partly as a result, Greece is in the sixth year of recession.

Markets have been more resistant to new shocks since the European Central Bank’s offer to purchase the bonds of indebted countries, lowering their borrowing costs. No bonds have been bought, but the offer’s mere existence has calmed markets and left the eurozone far more resilient than it was a year ago. Last month’s indecisive election in heavily indebted Italy, for instance, ruffled the market for only a day or two. Such fears were shortly dismissed by ECB President Mario Draghi as only “the angst of the week.”

European authorities, meanwhile, have ways to defuse bank runs, should they occur. If depositors start withdrawing money, the ECB and national central banks can replace the funds with cheap credit through their emergency lending programs—so long as the banks have securities to put up as collateral.

But down the road, the Cyprus precedent, even if quickly reversed, could come back to haunt eurozone policy makers by making depositors less sure about the safety of their money in case of trouble. It could also complicate creation of an EU-wide system of bank deposit insurance, part of long-term efforts to create a more robust financial system and prevent future crises.

Technically, the national deposit insurance scheme remains intact. The money is being taken as a one-time tax—little comfort to those who thought their money was safe. If another eurozone country runs into a banking crisis, a run on the banks there will be more likely.

“The damage is done,” said Louise Cooper, who heads financial research firm CooperCity in London. “Europeans now know that their savings could be used to bail out banks.”

The deal adds uncertainty for depositors and investors because it underlines to ordinary people that there is no EU-wide deposit guarantee. Insuring deposits is a national responsibility—and can only be done when the government has the money.

“Basically, Cyprus has not honored, at least as of Saturday morning, an obligation that is enshrined in EU legislation,” said Nicholas Veron, a visiting fellow at the Peterson Institute for International Economics in Washington. “It clearly has consequences because I think there is a very clear message to depositors in Europe.