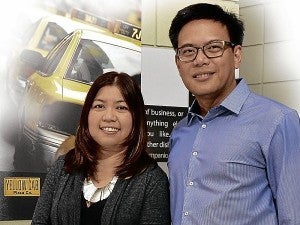 In 2006, Roy Quejada was at a career crossroads. Having risen the ranks of a leading hamburger joint since he started as a service crew member when he was just a freshman in college, Quejada seemed destined to grow old with the fast-food company and was, in fact, in the running for training manager when he found himself in talks with the group behind Yellow Cab Pizza Co.

Before he could make a decision, fate stepped in and made it for him: the training manager post went to someone else, and Quejada went to work as operations manager for the pizza chain—a dream job if there ever was one. A regular customer of Yellow Cab’s St. Francis, Ortigas, branch, he was a fan of its food (the meat-loaded New York’s Finest is his favorite pizza variant) and the distinct look of the store, from its often-imitated exposed industrial ceiling, to the hip, New York vibe of its yellow, black and white interiors and cool Vespa-riding delivery boys.

Sitting inside Yellow Cab’s first branch, the recently renovated store in Makati Avenue, the boyish, bespectacled 41-year-old exclaims, “All the while, I thought it was an international brand!”

Quejada believes this proudly Pinoy pizza company which had 34  stores then to grow to its current 100 stores (and counting).

“If I didn’t see it that way, I would have stayed in my old job,” he admits. “But I saw how competitive the brand could be.”

Seven years later, Quejada (who became COO after Yellow Cab was acquired by the Pancake House group in 2010), is expected to attend the launch of the brand’s 100th branch in the Butterfly Garden of Newport City, Resorts World, this April. There’s now a Yellow Cab up north in Laoag, Ilocos Norte, and one down south in Davao. And thanks to franchising, which the company is open to, there are even Yellow Cabs in Malaysia, Qatar and Abu Dhabi. The objective, declares Quejada to colleagues during the company’s latest strategic meeting, “isn’t to be number one or the best. We just want to have more loyal customers. Our thrust is to improve our food, service and cleanliness on a day-to-day basis, and if we do that, customers will keep coming back. Loyalty is the goal,” he says.

Brand-wise, the pizza chain that was the first to keep its stores operating 24 hours, seven days a week, is tweaking its image from a high-end hangout for special occasions to the restaurant you go to for everyday celebrations. On the glass wall of the Makati Avenue branch, an outline in white of a car plate with the catchphrase “Great Times, Great Pizza” sums up what Yellow Cab is all about.

“Research shows that people go to Yellow Cab for celebrations,” explains Quejada. “We want them to know that celebration doesn’t mean something as big as a graduation; it could mean getting recognized by your boss that day, or other causes for celebration from school or among friends.” 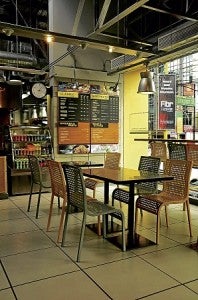 YELLOW Cab’s first-ever store in the Philippines, along Makati Avenue, gets the first taste of a renovated and distinct look—hip and industrial with a New York vibe.

Yellow Cab marketing manager Coochy Mamaclay avers, “Management is more open to reaching out to the community. What’s important now is the experience of our customers. For 12 years, we’ve maintained the image of the brand and premium quality of our products, but this year, and in line with the opening of our 100th store and the company’s vision of customer engagement, we have a very big campaign to build customer loyalty.”

If there’s anything that ensures customer loyalty, it’s Yellow Cab’s products-pure innovation and value for money. After all, this is the chain behind “Dear Darla”—a thin-crust pizza with slices you roll in fresh arugula leaves and alfalfa sprouts. Yellow Cab is also the first to introduce the 18-inch pizza-huge, filling meals ranging from an affordable P630 (for an all-cheese pizza) to P815 (for the Anchovy Lovers or the ultimate sampler, Four Seasons). Light on the budget, the 18-incher feed as many as a dozen hungry people, making them a hit among office and school pals.

For his part, Quejada, who standardized training procedures for store operations during his first two years with the company, is constantly finding ways to enhance Yellow Cab’s service execution. Cashiers and servers are trained to become more customer-oriented, and with the opening of more branches in key areas of the city, the pizza company is gradually improving its delivery service.

He’s also focused on strengthening relationships, and not just with Yellow Cab’s customers. In his previous job, Quejada was known as a trouble shooter, the guy bosses sent to problematic stores to straighten out issues that dealt mostly with people. As a troubleshooter, the COO’s problem-solving style is simple—too simple, in fact, you’d think there was a catch to it. “My mentality is this,” says Quejada, “I always ask myself, ‘What is the problem in this situation and how can I solve it?’ Then I communicate the answer to the people involved. That’s it!”

Though the answer elicits reactions of surprise and disbelief, the COO has apparently settled enough conflicts to know his approach works. “You know, I realize that most of the problems, and not just in restaurant management, just require you to go back to the basics. All you have to do is ask yourself what the problem is and how best to solve it,” he says. “Managing expectations is one solution—don’t over promise. Adjusting to a current situation is another. Face the facts, and proactively deal with them. It actually just takes a couple of tweaks to solve something you’d initially think of as a huge deal,” he points out. “The simplicity of how you think can already solve a lot of problems.”

The rule applies to staff, as well. Noting the dynamic nature of people (some work better alone, others with a team), Quejada says the bottom line to all their woes is this: “People value relationships, they just want to be recognized and appreciated.”

And so, the COO who worked his way up from cleaning fast-food restrooms makes sure to engage in friendly conversations with Yellow Cab crew members during twice monthly visits to stores. As a leader, marketing manager Mamaclay describes Quejada as “very approachable,” and like Yellow Cab’s 100 branches, is readily accessible 24/7. During one particularly devastating typhoon, when all power lines were down and store managers could not be reached, frantic crew members were able to get a hold of Quejada. “Buti nalang sumagot ka!” they told him, relieved.

Acknowledging the unpredictability of running a restaurant, plus the fact that he is directly accountable for anything that happens in the branches, Quejada also admits, “I don’t look at my work as work. If I stop working, my life stops.”

Indeed, this COO appears to be working all the time. A voracious reader, he describes his house as a library filled with management and marketing books, from Stephen R. Covey’s timeless The 7 Habits Of Highly Effective People;  Jim Collins’ Good To Great and Great By Choice; to Robert Kaplan and David Norton’s Balanced Scorecard and The Execution Premium. Meanwhile, his wife, Abby, who was previously connected with a telecommunications service provider before she gave birth to their daughter, now 6, serves as his adviser of sorts. “She has an eye for marketing,” he says.

Still, it’s not like he doesn’t know how to relax and have a good time. Quejada, who was on the University of the Philippines’ volleyball team, now bikes and plays badminton and encourages Yellow Cab’s staff to be active in their own way.

The Quejadas also like to eat out, and when this COO takes his wife and daughter to Yellow Cab on the weekends, he isn’t on official business. Hot wings chicken, Spaghetti Alfredo, and his must-have New York’s Finest pizza are always what they order. “We love the food!” exclaims this loyal customer.