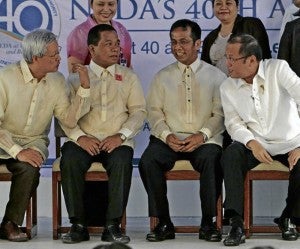 Living up to President Aquino’s advance information that the numbers would impress, the Philippine economy expanded 6.8 percent in the fourth quarter of 2012, lifting full-year growth to 6.6 percent.

The figures that government economists and statisticians announced Thursday beat their targets and analysts’ expectations.

Socioeconomic Planning Secretary Arsenio M. Balisacan said that on hindsight, the government’s 5- to 6-percent growth target for the past year seemed conservative.

Compared with the latest available data from other Asean countries, the Philippines’ fourth quarter growth in gross domestic product (GDP), the value of goods produced and services rendered in a given period, was higher than Vietnam’s 5.4 percent and Singapore’s 1.1 percent.

China’s economy expanded by 7.8 percent in the last quarter. Other countries still do not have available data for the full year.

Unsurprisingly, the GDP announcement by the National Economic and Development Authority (Neda) and the National Statistical Coordination Board (NSCB) was trending on Twitter, earning kudos from industry groups, such as the Makati Business Club.

Private economists, however, were not as impressed, noting that the lingering question was whether such figures could be sustained and translated into better incomes for many Filipinos.

Expectedly, Malacañang cheered the “exceptional” growth rate, trumpeting it as proof of the country’s ability to move toward “equitable progress” on a policy of good governance.

“It is a resounding affirmation of the Aquino administration’s fiscal strategy, backed as it is by our robust macroeconomic fundamentals and more importantly, the principles of good governance,” Budget Secretary Florencio Abad said in a statement.

While it was initially driven by government stimulus, the economic growth was now increasingly being driven by private sector activity, including investments, which grew by 8.7 percent in 2012, Lacierda said in a briefing.

“This means growth is becoming more sustainable from a fiscal and macroeconomic perspective. Private sector activity has been enabled by the Aquino administration’s dedication to positive reform. Without doubt, good governance means good economics,” he said.

Benjamin E. Diokno of the University of the Philippines School of Economics, however, was not  impressed.

“I agree it’s a strong growth. Considering its long-term growth potential and growth higher than 6 percent might be considered strong. Is it sustainable? That remains to be seen. We’ve seen this kind of growth before and they were not sustained. Is it inclusive? I’m afraid not,” he said.

Diokno said the contribution of agriculture to GDP continued to shrink, posting the lowest growth among the three major sectors.

“Based on the October labor statistics, the recent growth may   be characterized as labor-shredding growth. Close to 1 million jobs were lost,” Diokno said. Most Filipinos still depend on agriculture and related sectors for a living.

On the demand side (where goods and services are used), growth was still largely driven by household consumption and external trade.

The Neda said the expansion in public and private construction, and the electricity, gas and water sector led the growth.

In the first two quarters of last year, it was public construction that took up the slack in construction, but the private sector took over beginning the third quarter.

“This is what we mean by the private sector upping its stakes in the economy,” said Balisacan, who is also the Neda director general.

“Equally remarkable was the growth in the electricity, gas and water sector, growing by 5.1 percent, a far cry from its growth of 0.6 percent in 2011. No doubt this was in support of the increased economic activity in 2012,” he said.

The service sector also beat expectations with a 7.4-percent growth from trade, transport and communications, real estate, renting and business activities and other services.

Trade grew by 7.5 percent in 2012, more than twice the figure in 2011. Growth in transport and communications accelerated at 9.1 percent compared with 4.3 the previous year.

“We had expected a slower growth for the real estate, renting and business activities, which includes the IT-BPO, owing to the continued slowdown in the global economy. And yet the sector still managed to grow faster than expected at close to 8 percent,” Balisacan said.

There were also notable gains in other services, particularly, tourism-related subsectors, such as hotels and restaurants, and recreational, cultural and sporting activities. These subsectors grew 13.3 percent, compared with only 7.1 percent in 2011.

Balisacan said he was also pleasantly surprised with the growth in agriculture (2.7 percent).

“We only expected a 2.2-percent growth from the sector owing to weather disturbances forecast for the year,” he said.

In the first two quarters of 2012, it looked like the sector would underperform with a contraction in the fisheries sector. However, the turnaround happened beginning the third quarter and especially in the fourth quarter when the sector grew by 4.7 percent.

“We are also pleased to note that the output in the fishery sector had gone up by 3.3 percent, from eight consecutive quarters of contraction if not stagnant growth,” Balisacan said.

On the demand side, household consumption remained the largest contributor to growth in 2012, growing by 6.1 percent. Although the growth was slower than the 6.3 percent in 2011.

Growth was supported by the higher level of economic activity, low and stable inflation, inflows of overseas Filipinos’ remittances and government subsidy mainly through the conditional cash transfers.

“Note, however, that remittances of overseas Filipinos increased by 8 percent in dollar terms, but only by 2.8 percent in peso terms in October and November 2012,” Balisacan said.

Exports of goods recovered with a growth of 8.7 percent for the year from a contraction of 4.2 percent in 2011. Exports of services grew by 9.8 percent, more than twice the growth the previous year.

“However, this growth was actually slower than expected. Perhaps the sector is already feeling the pinch from the combined impact of the global economic slowdown and the appreciating peso,” Balisacan said.

Fixed capital formation also improved to 8.7 percent in 2012 as growth in investments for public and private construction and durable equipment registered significant increases.

In spite of the country’s achievements in 2012, Balisacan said the government would not be “lulled” into complacency.

“It is our immediate task to put in place policies and implement programs that will sustain our economy’s growth over the medium term. We shall continue planting the seeds of a structural transformation in our economy to make it more investment and industry-led. This, in turn, will mean more jobs and employment opportunities of high quality for Filipinos, thus ensuring that growth is inclusive and benefits all sectors of society,” he said.

Cid L. Terosa of the University of Asia and the Pacific said the growth level of at least 6 percent could be maintained as long as the Philippines kept building up productivity.

So far, Terosa said, the fourth quarter and full year 2012 growth rates were impressive but the question remained whether those numbers could translate into better income for many.

“Employment and continuous structural changes are keys to economic growth over the medium-term,” he said.