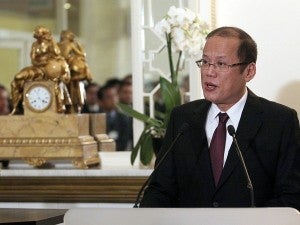 DAVOS—President Aquino on Friday wrapped up his World Economic Forum (WEF) debut performance with a new stream of prospective institutional investors, new projects with existing investors, and a deal for the Philippines to host the WEF’s East Asia summit next year.

Asked whether this would be a long-term collaboration with WEF, Mr. Aquino said the Philippines—with a story to be proud of—was now willing to boost its participation in global events.  “We can participate in the world stage and not feel—how should I put it—like a second-class citizen. Yung parang hindi na nakakadiyahe o nakakahiya na magpapa-participate tayo dito. Meron naman yata tayong puwedeng ipagmalaki na rin (It’s no longer shameful for us to participate because we have something to be proud of,” he said.

In a talk with Filipino reporters on the sidelines of the WEF meeting here, Mr. Aquino announced that he had accepted an offer to host the WEF East Asia Summit 2014, a smaller regional summit in the forum’s network.

Mr. Aquino attended a series of top-level meetings, mostly closed-door sessions, the best of which for him, he said, was a business executive forum hosted by Ayala Corp., whose two top honchos—Jaime Augusto Zobel de Ayala and Fernando Zobel de Ayala—are active members of the WEF and are regular Davos participants.  The forum was attended by the top officials of more than 30 companies.

“I think there’s a universal consensus both by the participants and by the Cabinet members present, our business sector, that it was a very successful meeting,” Mr. Aquino said.

“We were not on the radar’s range of so many entities for the last five years or so, but now we are, so they want to know better.  We’ve received universal praise from so many quarters. [Now] we can put in more substance,” he said.

The President said one of the prospective investors had indicated plans to send a mission to the Philippines to explore fresh investment possibilities.

Even some companies with existing operations are now looking for ways of expanding their operations in the country, Mr. Aquino said.

He said: “Some firms, including very big hedge funds based in the United States, already indicated that they will be sending a team. Obviously, some of them don’t want to be mentioned, so we cannot really mention [their names].”

Guillermo Luz, cochair of the Philippine National Competitive Council, said of Mr. Aquino’s WEF debut: “I think the trip emphasized the progress we have made to existing investors and, more importantly, opened the eyes of other investors who have not taken a close look at the Philippines.

The President was able to project the reforms and give lots if specific examples to investors who asked questions.”

Deemed by many as the de facto private sector representative of the world, the WEF is an independent international organization committed to improving the state of the world by engaging business, political, academic and other leaders of society to shape global, regional and industrial agendas.