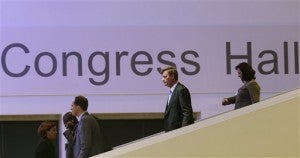 Tidjane Thiam, group chief executive of Prudential, United Kingdom, did not share Weber’s views, saying that the needs of emerging economies were different as their regulators were driven by national politics.

“The debate should not be a Western debate. Global regulatory standards are desirable, but will be difficult to achieve because countries across the planet are in different stages of development,” Thiam said.

To highlight his point, Thiam cited the difficulty in implementing the European directive Solvency II across 27 European Union member states. This directive attempts to codify and harmonize EU insurance regulation. “So far, it has failed,” he said. Thiam pointed to the “disconnect” between the speed at which regulation and the real world move.

Min Zhu, IMF deputy managing director, said the financial services sector was simply too big. “Why did we have such a huge financial crisis? Because the financial sector is too big. The banks moved into market-based activities, where it is more opaque and there are fewer regulations. The products are too complicated. We have a long way to go.”

James Dimon, chairman and CEO of JPMorgan Chase & Co., disagreed saying banks were not too opaque, although they were complex.

“Some banks were ports in the storm because they were strong and diversified … they helped countries survive,” Dimon said. He said JP Morgan was not just a “fair-weather friend,” stressing that the institution had been there through both good and bad times.

Andrey Kostin, chairman and CEO of VTB Bank at the Russian Federation, pointed out that the industry had made a comeback.

Kostin noted that in Russia, consumer loans had increased by 40 percent. “We should have better regulation, but not necessarily more. We will not achieve growth unless we have a proper financial industry that lends money that fuels growth,” he told participants.—Doris C. Dumlao