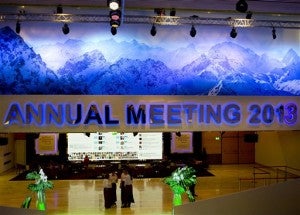 Cleaning staff make the last preparations inside the Congress Center, on the eve of the opening of the 43rd Annual Meeting of the World Economic Forum in Davos, Switzerland, Tuesday, Jan. 22, 2013. By coming to the WEF for the first time, President Aquino is seeking more investors and tourists to come to the Philippines. AP PHOTO/ANJA NIEDRINGHAUS

ZURICH—By coming to the World Economic Forum for the first time, President Aquino is seeking more investors and tourists to come to the Philippines in order to create more jobs and sustain the country’s economic momentum beyond his term as chief of state.

In a press briefing here on Wednesday before heading to the skiing resort of Davos for the WEF annual meetings, Communications Secretary Ramon Carandang told visiting media that it would be a good time for the President to go to this global forum, with Philippines now “in a global spotlight.”

Aquino is also debuting in Davos at a time that the Philippines is on the brink of getting a sovereign investment grade rating from major credit rating agencies. Two credit-watchers—Standard & Poor’s and Fitch Ratings—have indicated this much-awaited upgrade will happen soon. “We’re hopeful given continuing pace of reforms, we can get upgraded in the near future,” Carandang said.

The Geneva-based WEF is an independent international organization committed to improving the state of the world by engaging business, political, academic and other leaders of society to shape global, regional and industry agendas.

Europe is one key geographical region where the Philippines is getting very little media coverage and this trip to Davos for the WEF meetings is a mission to boost awareness on the Philippines, according to Carandang. While the government was not expecting to sign big investment deals here, he said the government would like to tell “what opportunities are there.”

“He will be speaking on efforts to combat corruption and how that has contributed to economic growth and interest we’re seeing so far,” Carandang said.

These efforts are meant to sustain the country’s growth trajectory beyond Aquino’s term, which expires in 2016. “Investments are important because we want to create jobs. We’re doing a lot of intervention to help the poor since day 1, but to make this sustainable beyond 2016, we need to make sure that investors come in to create jobs. This is one of the big priorities of the President in coming to Davos,” he said.

Carandang said this trip would hopefully encourage more European investors to increase investments or make substantial investments if they were still contemplating on it.

In the case of German car manufacturing giant Volkswagen, for instance, Carandang said this company has been keen on re-establishing operations in the Philippines, having taken the first step to do so through a distribution partnership with the Ayala group. The President is set to meet with top officials of Volkswagen as part of this trip.

Volkswagen, which is headquartered in Wolfsburg, Germany, announced in 2012 the appointment of Ayala’s wholly owned subsidiary, Ayala Automotive Holdings Corp., as the Philippine distributor for Volkswagen passenger vehicles. The expansion in Asia is part of Volkwagen’s vision to become the world’s No. 1 car manufacturer (it ranks second at present) by 2018.

This visit is also part of the government’s bid to attract more investors to participate in infrastructure-building.

“Our efforts to grow the economy are focused on tourism, infrastructure and agriculture. There are a lot of big infrastructure companies in Europe that may be interested in helping us develop our infrastructure,” Carandang said, adding that the prospects were very bright given the backlog in Philippine infrastructure relative to Southeast Asian peers like Thailand and Malaysia.

Aquino is also expected to brief investors about the road map for the future. “One of the things that people ask us is how we can sustain what we’re doing. We’re seeing efforts to make growth more inclusive, level the playing field,” Carandang said.

“I think the international community likes what we’re doing and interested to know what we want to do in the next few years and beyond.”

This forum is also seen helping Philippine regulators assess the global economic environment they will have to navigate in the months ahead. By meeting with people like International Monetary Fund managing director Christine Lagarde, Carandang said, “it’s going to be a chance for us to pick their brains.”