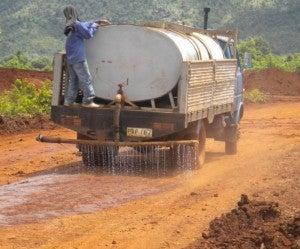 A Citinickel mine operation in Palawan PHOTO FROM FACEBOOK.COM

The operations of a mining unit of publicly listed Oriental Peninsula Resources Group Inc. in southern Palawan are under review after the reported outflow of silt from its mine site to the province’s Pinagduguan River and nearby farmlands.

According to a report reaching the Mines and Geosciences Bureau (MGB), Citinickel Mines and Development Corp. was issued a notice of violation by the Department of Environment and Natural Resources after silt-laden water spilled from its silt pond No. 2 at its Toronto Mining Area in Barangay (village) San Isidro, Narra, in Palawan on Nov. 25, 2012.

The water from the pond flowed into the river and irrigation canals affecting six farm lots and a fish pond.

Findings of a validating team composed of local officials, a nongovernment organization and Citinickel showed farmlands owned by six farmers were found with one centimeter-thick silt deposits in areas away from water inlets.

Silt deposits measuring four centimeters were recorded at water inlets and near the irrigation canals on the upper stream of the National Highway in Barangay San Isidro.

After the investigation, the Environment Management Bureau of the DENR asked Citinickel to pay the cost of the damaged farm lots and the river, which amounted to P146,745 and P368,000, respectively.

“Citinickel must comply with the notice of violation. They must immediately pay the farmers compensation,” MGB director Leo Jasareno said in an interview.

Jasareno said he had ordered the regional office in Palawan to probe the incident and determine if Citinickel should continue operations.

“I have asked our regional office to find out if there is a ground to allow the company to still continue operations,” Jasareno said.

Jasareno said a cease-and-desist order on the operation of the Silt Pond No. 2. had been issued by the EMB of DENR immediately after the outflow incident on Nov. 25.

According to the MGB report, the incident happened on the night of Nov. 25 “due to the lapses in judgment of the company mine foreman who was tasked to drain water from silt pond no. 2 to silt pond no 1.”

Instead, the foreman excavated a canal toward an old and non-serviceable silt sump that resulted in the outflow of the silt.

The company is operating on a 25-year mineral production sharing agreement with the DENR since 2007. It has a 768-hectare property in the municipality of Narra in Palawan, where it is mining.